They each have a different story, but one common thread unites every one of these NRL players with a point to prove in 2021.

Whether it’s a recovery from injury, a return from overseas or a career revival, there are plenty of players who must prove themselves all over again ahead of the season kick-off in March, NICK CAMPTON looks at the bounce-back player at every club. South Sydney were not short for bone-chewing middle forwards last year but Jai Arrow can provide a little more stability and his ability to play big minutes gives them more flexibility in terms of their bench rotations. Arrow and Cam Murray should be the two main constants in the middle, which lets Wayne Bennett deploy Tom Burgess, Tevita Tatola, Keaon Koloamatangi and Liam Knight in shorter, sharper stints. The Queensland Origin prop’s strong offloading game should make South Sydney’s attack more dangerous through the middle of the field and create further opportunities for Damien Cook. Jamayne Isaako should have a clear run at making the fullback job his own at the Broncos. Picture: NRL Photos/Gregg Porteous768×768

Jamayne Isaako should have a clear run at making the fullback job his own at the Broncos. Picture: NRL Photos/Gregg Porteous

Kotoni Staggs’s ACL injury will keep him sidelined until mid-season, which means 19-year old prodigy Tesi Niu will likely switch to centre which opens the door for Jamayne Isaako to claim the fullback role. Isaako is one of a number of Broncos who struggled under Anthony Seibold — a vote of confidence from coach Kevin Walters should bring him back to his best and his high workrate gives him an edge over the other contenders. New Bulldogs coach Trent Barrett said Kyle Flanagan had earnt the respect of his teammates through his efforts in the pre-season and because Canterbury are in the midst of a rebuild, they can afford to be far more patient with Flanagan than the Roosters. Barrett is all-in on Flanagan and has the youngster pegged as the exact sort of halfback he wants in charge of his team. “He can manage a game, he’s an out-and-out halfback and he’s the style of halfback that I like,” Barrett said. “We’ve signed players around him that will complement his skill-set.” Incoming coach Todd Payten has three legitimate NRL starters to choose from in the halves in Michael Morgan, Scott Drinkwater and Jake Clifford, as well as promising youngster Daejarn Asi. But his skipper Morgan is the most versatile of the four playmakers and thus the success or failure of North Queensland’s spine depends on exactly how Payten decides to use Morgan.

“We just need to stay fit in key areas,” Payten said. “Michael Morgan is a big part of that.” Jack Bird will start the season in the centres for the Dragons. Picture: Dragons Digital768×768

Jack Bird will start the season in the centres for the Dragons. Picture: Dragons Digital

Bird spent much of the off-season training as a forward but with a view to sparing his body the heavy collisions of the middle of the field he moved back to centre for his first trial hitout. Given Bird’s versatility and skill, his position isn’t as important as simply getting on the field and staying there. Centre is unlikely to be his long term spot for the Dragons, but stringing matches together will set him back on the path to elite status. “He’s got a real competitive nature, he just needs to get a block of footy in and he can get back to where he was before,” said former Sharks coach Shane Flanagan. “It’s a matter of putting four to six weeks of football together at NRL to get his confidence back.” 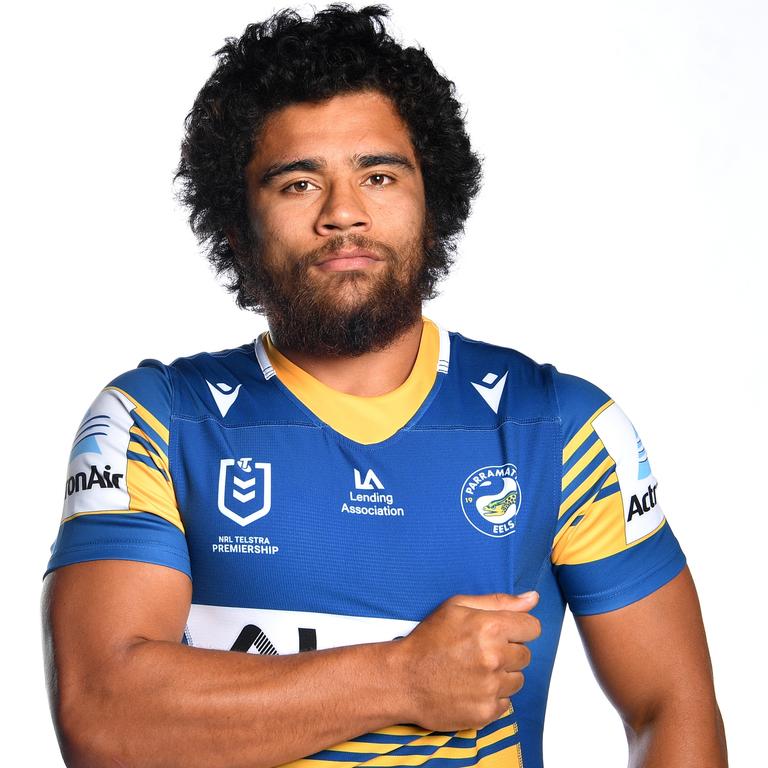 Parramatta have needed a little more punch off the bench and they’ve found it in this former Warrior. Capable of playing middle or edge, Isaiah Papali’i was one of the most underrated young forwards before losing his way a little over the past two seasons. But a fresh start is just what the doctor ordered for the 22-year-old, especially under a coach such as Brad Arthur, who has taken players with far less talent than Papali’i and turned them into consistent and productive first-graders. He could slip under the radar as one of 2021’s best-value buys. Jayden Brailey needs to bring more attack to his game in 2021.

After Jayden Brailey’s 2020 campaign was wrecked by injury, coach Adam O’Brien is already relishing the prospect of when the club can get him back on to the field “with a guy like Tyson Frizell” to bring some consistency to the Knights. Match fitness isn’t all Brailey needs from Newcastle’s trials — he also needs to show his running game and creative skill from dummy-half to take the pressure off his halves. “Jayden is tough as nails, a great defender and he’s always had to work a little harder on the attacking side of his game because the defensive side has been easy for him,” said Flanagan, Brailey’s former coach at Cronulla. “The knee injury was unfortunate, but it gave him time to work on other areas of his development. He’s probably a little bit stronger at the moment.” Kurt Capewell will be looking to build on a superb Origin series for Queensland. Picture: NRL Images768×768

Kurt Capewell will be looking to build on a superb Origin series for Queensland. Picture: NRL Images

The Origin starter will likely come off the bench for the Panthers due to Liam Martin and Viliame Kikau blocking his way at second row. Given Penrith’s lack of depth in the middle of the field after the departure of James Tamou and Zane Tetevano, an unorthodox solution could be to use Capewell as a lock forward off the bench. Capewell would give the side great leg speed and athleticism through the middle and coach Ivan Cleary would be able to get more minutes into the 27-year-old.

South Sydney were not short for bone-chewing middle forwards last year but Jai Arrow can provide a little more stability and his ability to play big minutes gives them more flexibility in terms of their bench rotations. Arrow and Cam Murray should be the two main constants in the middle, which lets Wayne Bennett deploy Tom Burgess, Tevita Tatola, Keaon Koloamatangi and Liam Knight in shorter, sharper stints. The Queensland Origin prop’s strong offloading game should make South Sydney’s attack more dangerous through the middle of the field and create further opportunities for Damien Cook. 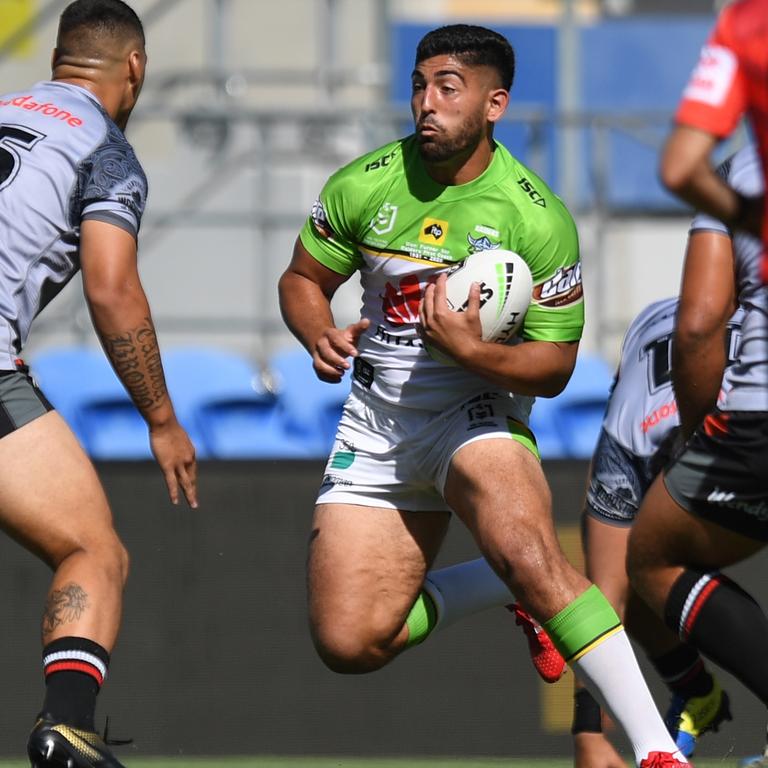 Off-field indiscretions by teammates may be just the chance Emre Guler needs.768×768

Off-field indiscretions by teammates may be just the chance Emre Guler needs.

Corey Harawira-Naera and Corey Horsburgh’s sanctions for drink-driving have cleared the way for Emre Guler to snag a spot on the Raiders bench. The Mascot junior impressed last year before a foot injury sidelined him. Given Canberra’s forward depth, it would have been difficult for him to get to the front of the line in 2021. But now Guler, a mobile, powerful runner with strong footwork, should land a spot. 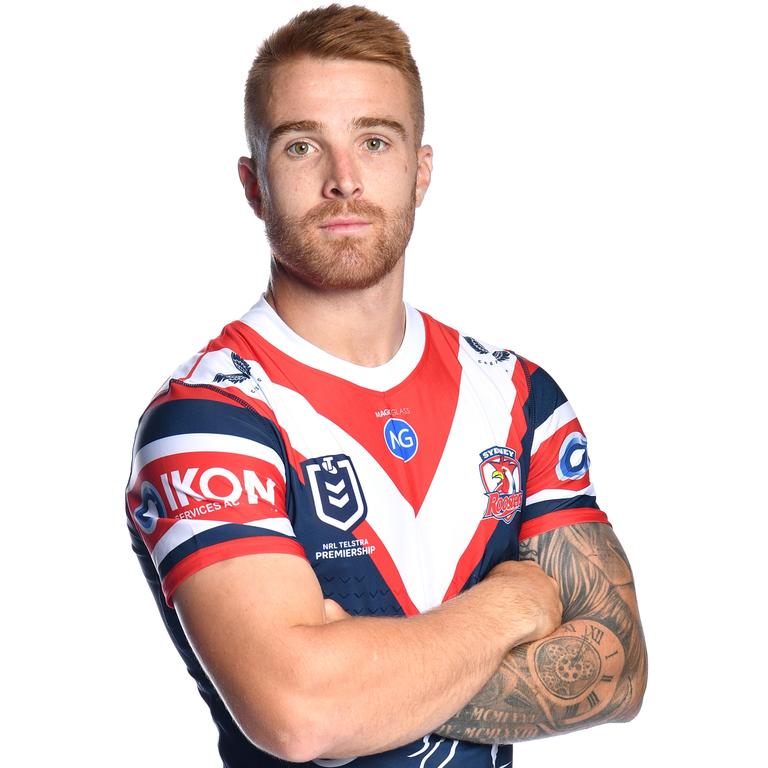 Adam Keighran is an under the radar utility at the Roosters. Picture: NRLPhotos/Gregg Porteous768×768

Adam Keighran is an under the radar utility at the Roosters. Picture: NRLPhotos/Gregg Porteous

Adam Keighran has impressed the Roosters since arriving from the Warriors and his utility value plus his goalkicking may give him an edge over Sam Verrills in the race for a bench spot. While Verrills’ talent is unquestioned and he’s contracted to the club until the end of 2024, he’s an out-and-out hooker. With his ability to cover the halves and centres, Keighran could easily go from Warriors cast-off to a crucial bench weapon. 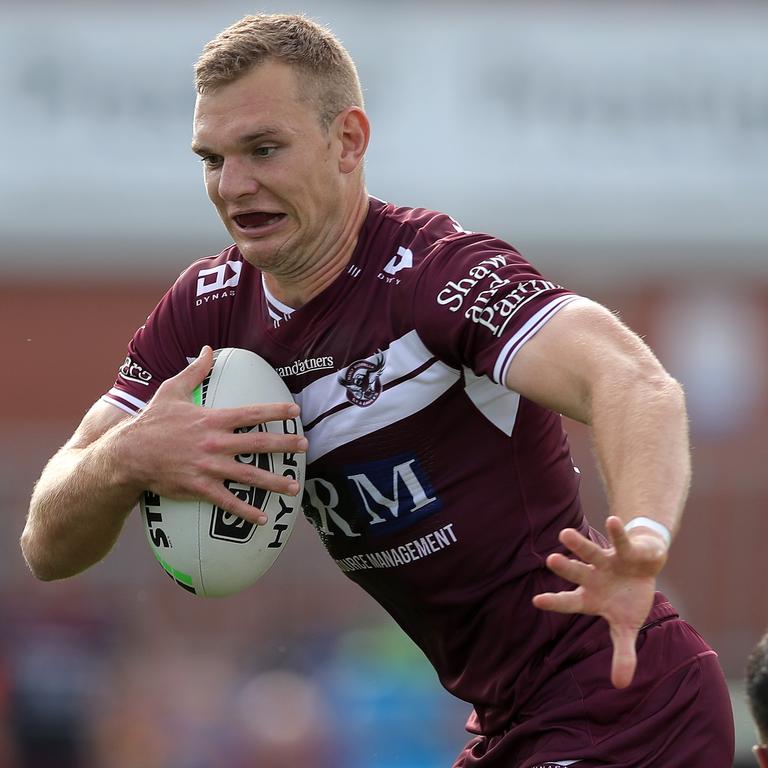 It is easy to lose sight of Tom Trbojevic’s youth — he will not turn 25 until the end of his seventh season in the NRL — and his form when fit has always been strong. But it’s been a while since we saw the best of him consistently. The Sea Eagles missed him badly last year and need his hamstrings to hold together. “I had a lot of time so there was no rushing the recovery and I’m back into full training now,” Trbojevic said. “To have a full pre-season under my belt definitely helps and I’m enjoying being back at training.” 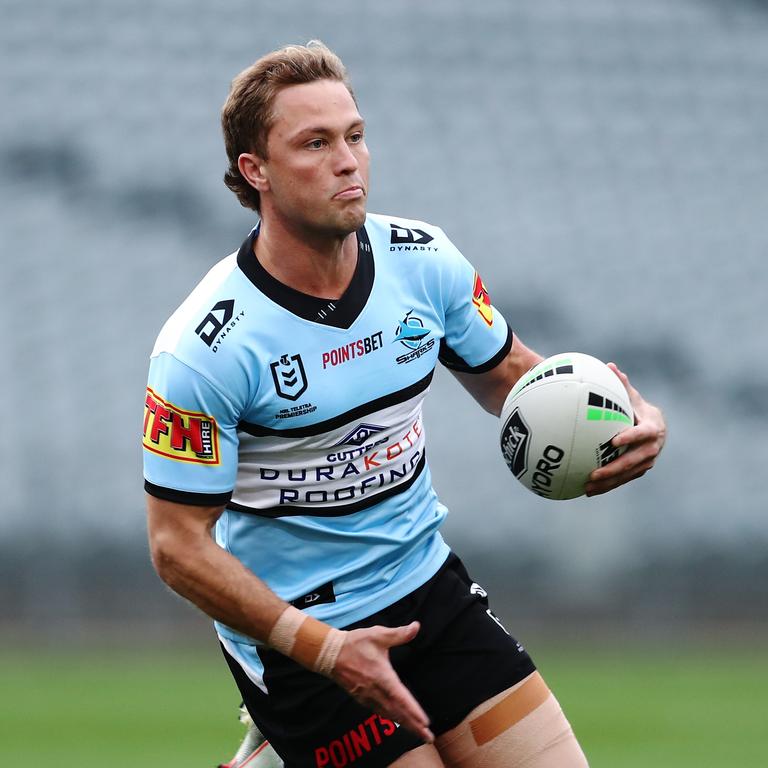 Matt Moylan is ‘training the house down’ at the Sharks. Picture: AAP Image/Brendon Thorne768×768

Matt Moylan is ‘training the house down’ at the Sharks. Picture: AAP Image/Brendon Thorne

Reports out of the Shire suggest Matt Moylan is entering the season in excellent shape — but he needs to hit the ground running as he’ll be replacing star playmaker Shaun Johnson in the halves for the opening rounds. “He’ll play differently to Johnson, and I think it’ll be good for Matty,” Flanagan said. “The role at fullback these days has a lot of high-speed running. So for him to ease back into the process of playing footy, I think playing five-eighth will be good for him.” The big Fijian has become one of the NRL’s underrated players in recent years before injury cruelled his 2020 campaign, forcing him to miss the grand final win over Penrith.

With Tino Fa’asuamaleaui heading to the Titans, there’s a vacancy on the Storm bench and Tui Kamikamica seems to be the man to fill it, bolstering the club’s forward power. James Roberts is thriving at his new club the Wests Tigers.768×768

James Roberts is thriving at his new club the Wests Tigers.

League’s fastest man has been starring in pre-season at the Tigers, knocking over Jacob Liddle, the club’s reigning speed champion over 40 metres. In fact, nobody at the Tigers has been able to get close to James Roberts all pre-season — he’s been thriving under Michael Maguire’s intense methods. “The other thing that he is really strong at is helping the guys around him,” Maguire said. “His experience is helping others and that is something he has brought to the club. Fit and focused, Roberts can still be one of the most dangerous players in the competition and word out of the Tigers is he’s ticking both boxes. Ashley Taylor will be working behind a powerhouse forward pack in 2021. Picture: Jason O’Brien

On the back of Gold Coast’s off-season recruitment drive, Ash Taylor has never been in a better position to succeed. Instead of being asked to do everything on his own, the deck is now stacked in his favour for the first time since his rookie year. “He played fantastic for us at the back end of the year and he wasn’t 100 per cent,” coach Justin Holbrook said. “He has had wrist and hip surgery. He played through pain. I was really happy with how he played and fit in with the team. I’m expecting more of that, nothing else.” 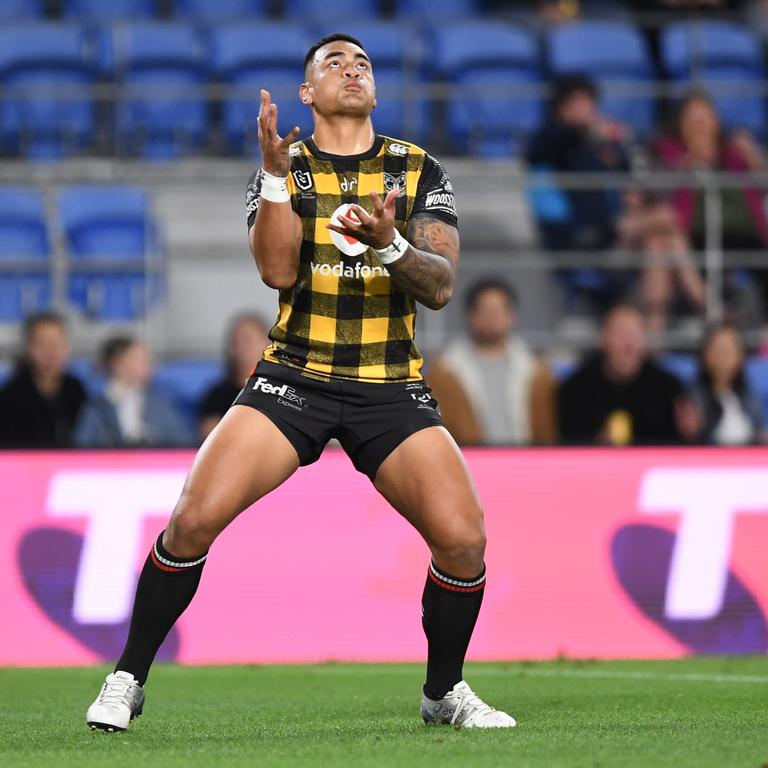 Ken Maumalo packs a punch out wide for the Warriors.768×768

Ken Maumalo packs a punch out wide for the Warriors.

Ken Maumalo’s mix of finishing skills and raw power were missed after he headed back to New Zealand after Round 11 last year because of COVID, but Maumalo should be ready to regain his spot among the game’s top wingers. Maumalo will also boast a new centre partner in Euan Aitken, who’s been training alongside the big man on the left flank. “It’s going well,” Aitken said. “It’s good to work with someone that size, you feel protected on the edge in defence. When people like that get the set started, it makes your job so much easier. It creates metres, gets that momentum going forward.”

Not sure Jai Arrow has any point to prove.

I’d say Benji Marshall. If Wayne can organise the bench rotation (with Murray and Arrow capable of long minutes) then having Benji as a super sub could be devastating.

Imagine the last 15 minutes of each half with Cody, Latrell, Cookie, Reyno and Benji. The defence wouldn’t have a clue who to focus on. Whack one mole, another mole puts on a try.

Ahead of the GOAT?

C’mon, guy needs to do his apprenticeship first.