Suaalii certainly believes so, given that’s what he demanded from South Sydney in order to re-sign with the club last year.

Before he was released from his Rabbitohs contract to join the Roosters, Suaalii’s handlers attempted to negotiate a five-year contract extension to remain at Redfern. While it has been well publicised that the teenager sought get-out clauses for the final three years of the deal, the financial terms have remained secret until now.

The Sun-Herald can reveal that Suaalii was seeking $1 million in the fifth and final year of the contract, an extraordinary demand given the teenager has never been tested against grown men.

Even in the first year of the proposed deal, the 17-year-old was seeking almost half that amount, about $480,000, with the asking price rising significantly in each of the ensuing seasons.

The Rabbitohs could potentially have come close to meeting Suaalii’s expectations for the initial years of the deal, given several third-party sponsors, including Asics and F45, were considering partnering with the King’s School student. However, the get-out clauses and the seven-figure request were considered unacceptable for a teen yet to prove himself beyond schoolboy level.

Had the Rabbitohs caved in, they would have put Suaalii into the stratosphere of the NRL’s elite million-dollar men – alongside the likes of James Tedesco, Daly Cherry-Evans, Nathan Cleary, Jason Taumalolo, Tom Trbojevic and Ben Hunt – all before he had made even a reserve-grade appearance, let alone got on the field in first grade.

Another previously unknown twist in Suaalii’s protracted negotiations with Souths was that the outside back was already contracted to the club for 2021, but had a little-known get-out clause that could have been triggered up until August 31 of last year. However, Suaalii waited until the day after it lapsed to express a desire to leave early, escalating tensions between the parties. 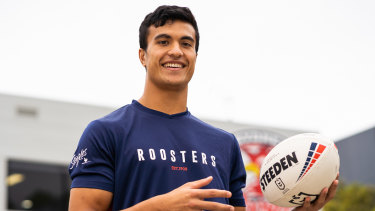 Even then, the Rabbitohs were prepared to either strike a new extension arrangement or release him to rugby union or a rival NRL club. But when the Herald revealed a month later that he was keen to join the Roosters, the “Pride of the League” decided to play hardball.

Souths were not prepared to gift the most hyped teen of his generation to their arch-rivals and only relented after securing a $110,000 transfer fee. It is a sum that would not have been required had Suaalii requested his release before August 31.

In the end, the Roosters got their man, at a fraction of the price he was seeking to stay at South Sydney, on a two-year deal. The Roosters did so after granting Suaalii the get-out clauses he was seeking, in the belief he will not want to leave Bondi Junction once he has settled in under coach Trent Robinson.

Under NRL rules, Suaalii is not allowed to make his first-grade debut until he turns 18, a milestone he will reach on August 1. However, Rugby League Central has indicated an exception could be made to ensure he does not defect to rugby union.

Now it is time to justify all the hype. Footy fans will get their first glimpse of Suaalii when he runs out for feeder team North Sydney on Saturday in the curtain raiser to the tricolours’ final trial clash against Canberra in Queanbeyan.

What was shaping as a mundane lower-grade trial will now attract unprecedented interest as the rugby league world tunes in to see if the 196-centimetre, 98-kilogram back can dominate seasoned campaigners the way he did schoolboy contemporaries.

The Roosters are not expecting immediate return on their investment, preparing to introduce Suaalii to first grade only once they believe he is ready to handle the physical and mental demands.

When Joseph Suaalii, the most hyped teen footballer of his generation, sought a seven-figure payday to remain at South Sydney, the Rabbitohs had had enough.

Glad the club let him go

In the end he signed with the roosters for qtr of that amount.

As they say “ roosters have great management and an awesome coach”

I’ve always been a firm believer that no one is bigger than the club, no matter how talented you are or think you are.

Rugby League is a 17 man game and no matter how good a player could of be or believes they could be, decisions have to be made based on the balance of the 17 we have and in the best interest of the morale of those 17 players and the squad on a wider spectrum.

No matter how good Suaalii could be and the knowledge that he could switch to Union at anytime, Souths made 100% the right call, even if he took less to play for us.

Well I will say it once again “fuck him”

Don’t fuck-up Joesph or the media will have a field day with you and furthermore you don’t want to disappoint Uncle Nick…no pressure young Joe.

Yeah right…Wanted the huge $$ from us yet signed for a 1/4 of that to go to the rorters. In what universe is that plausible.

It looks like he tried to play us but we didn’t bite.

He could have left early as the article stated and we would have received nothing. As it turns out, he left, we got compensation and as it stands we have lost a player with great potential but has done nothing to suggest he is worth even half of his million dollar demand.

It’s a bad look for Joseph and his father who was reportedly advising him throughout his negotiations. The whole Rugby million dollar offer rumor appears to be a strategy initiated by the Suaalii camp to force Souths to the table. He has ended up exactly where he belongs, at “Mercenaries are us” central, the Rorters will not wait around too long for Joseph to realise his great potential, the clock is ticking.

Nateski is not his father

Offering him a ridiculous amount to begin with was always going to end in his demands getting out of control sooner or later.

You simply cannot offer someone who can’t even play first grade yet, half a million bucks. In what world is that good cap management?

He’s going to be another big name junior who won’t deliver long-term in first grade, like so many others before him.

Does anyone know how he went in the trial yesterday.

@Rabbitoh would be the best one to ask, He is the only one i know of that was at the game.

Who is he kidding

I get the strong feeling Uncle Nick was behind the scenes pulling the strings even at that stage. Probably having a good chuckle at our expense

Thanks. I meant Suuali. He played for Norths yesterday.

Yes but I’ve heard Nateski fell out with them over their attitude during the negotiations and his father sought advice from Isaac Moses.

I thought Moses was desperate to save his license and thought by delivering Suuali to Easts Politis might exert his influence and save him.

They pulled him from it cause they didn’t want the media circus. His debut against seasoned players is next week running out for Norths.