Seek and you shall find: Cartwright's career revival

Jed Cartwright was trawling construction job listings during the COVID-19 break, fearing his rugby league career would come to a premature end.

Now, three months after accepting a lifeline from South Sydney, the forward is on the cusp of playing in a grand final.

Standing in the way are minor premiers Penrith, his former club with whom the Cartwright name holds reverence thanks to his pioneering grandfather Merv and premiership-winning father John.

The 23-year-old played one NRL match for the Panthers in 2019 following a few injury-affected seasons.

“I was on Seek looking for jobs [after the NRL halted in March] - I definitely didn’t think I’d be in this position,” the back-rower said after Saturday’s 38-24 win against the Eels at Bankwest Stadium.

"I didn’t know if there was going to be any more football. I was off-contract and I didn’t think I’d get a game with no NSW Cup.

“I’m very grateful that the Rabbitohs reached out … I was on [Seek] for a while. I was pretty stressed out there for a little bit. I didn’t apply. I was just sort of seeing what was out there.”

Cartwright had earlier started a construction apprenticeship organised by Penrith but the prospect of being on the tools full-time was “daunting”.

Luckily he didn’t end up submitting his resume. After five strong games off the bench, Cartwright is relaxed and has rediscovered his love of the game.

“I was at Penrith for four years there and it just sort of felt like I was progressing nowhere,” he said.

"They sort of told me there was no future for me at the club, so I signed with Souths for a couple of years.

"Souths came to my manager and said, ‘What do you think about him coming straight away?’. It happened pretty quickly but I’m definitely happy with the decision I made.

"It was a bit of a bitter pill to swallow [not being wanted at Penrith]. It came through my manager, so the club never really spoke to me. When I found out, I sort of said let’s go straight away.

“Not too much really fazes me. I sort of had a feeling anyway. It was a big deal for me and my family playing at Penrith.”

While many of his close friends are no longer playing for the Panthers, Cartwright remains tight with lock Isaah Yeo.

“I’ve been on a few boys trips with him, so he’ll be one of my best mates for life. He sent me a message after the game saying good luck but I might message him through the week,” Cartwright said.

Jed Cartwright on his departure from Penrith

“But towards the end of the week, he sort of becomes the enemy. I’ve been to Melbourne and America with him. It was a group of six of us that were really close and we went away together.”

Cartwright credited Rabbitohs coach Wayne Bennett for his immense faith to the point the Titans junior has “a lot more belief in myself now than what I did out there [at Penrith]”.

As for the preliminary final, Cartwright is approaching it as “just another game” despite the opponent.

“Me and my family will always have a soft spot for Penrith and always hope they go well … But not next week.” 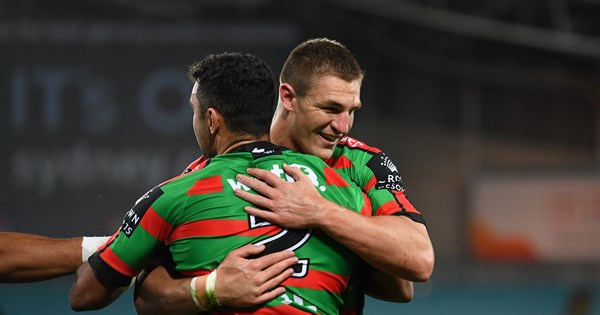 Seek and you shall find: Cartwright's career revival

Rabbitohs forward was hunting for jobs when competition halted.

Wayne has definitely been on the mark with our budget buys.
Another young man who holds himself well and is appreciative of what Souths have offered him.
So many good stories at Souths,you’ll get yourself a premiership ring this year Big Jed!

@Chuck I can see a big future for young Jed