As calls for the introduction of an 18th man reach fever pitch, PHIL ROTHFIELD has obtained a copy of a secret injury surveillance report.

If NRL players were racehorses you would call in the RSPCA after a weekend of a devastating injury carnage.

Rugby league is a gladiatorial game and the toughest body contact sport on the planet but the NRL is expected to approve an 18th man before next weekend to ease health and safety fears and catastrophic injury toll.

The players association has finally had enough.

“We understand we’re in the entertainment industry but we’re also in the human being industry,” says RLPA boss Clint Newton, “We can’t have players exposed like they are at the moment.

“The concerns on player health and safety outweigh debate about the challenges and complexities of having an 18th man. It’s got to happen now.”

Newtown raised his concerns with NRL chief executive Andrew Abdo over the weekend.

It was not a pleasant conversation. The Sharks lost Sione Katoa to a serious knee injury.1280×720

The Sharks lost Sione Katoa to a serious knee injury.

“I want to make it clear that the introduction of an 18th man doesn’t eliminate all our current concerns but it would reduce pressure on players in the interim until we work through the impact of these new rules with more data,” Newtown said.

“The NRL rightly says it will always listen to the fans in regards to rule changes.

“Well now’s the time to engage with the players. They’re the ones being heavily impacted and the game has to prioritise their health and safety.

“I can’t definitely say that it’s definitely because of the rule changes but we’ve never seen players endure such intensity and fatigue ever in the game’s history. There are consequences that come with that.

“I get we’re only three rounds in but we need to do something about it now. Otherwise there needs to be a good explanation why not? We’ve seen them act pretty quickly when it suits them.” The weekend was one of rugby league’s worst and most brutal for a long time.

While the Panthers and Storm played a magnificent game on Thursday night, it was quickly overshadowed by the shocking injuries with players falling like dominos across the game. 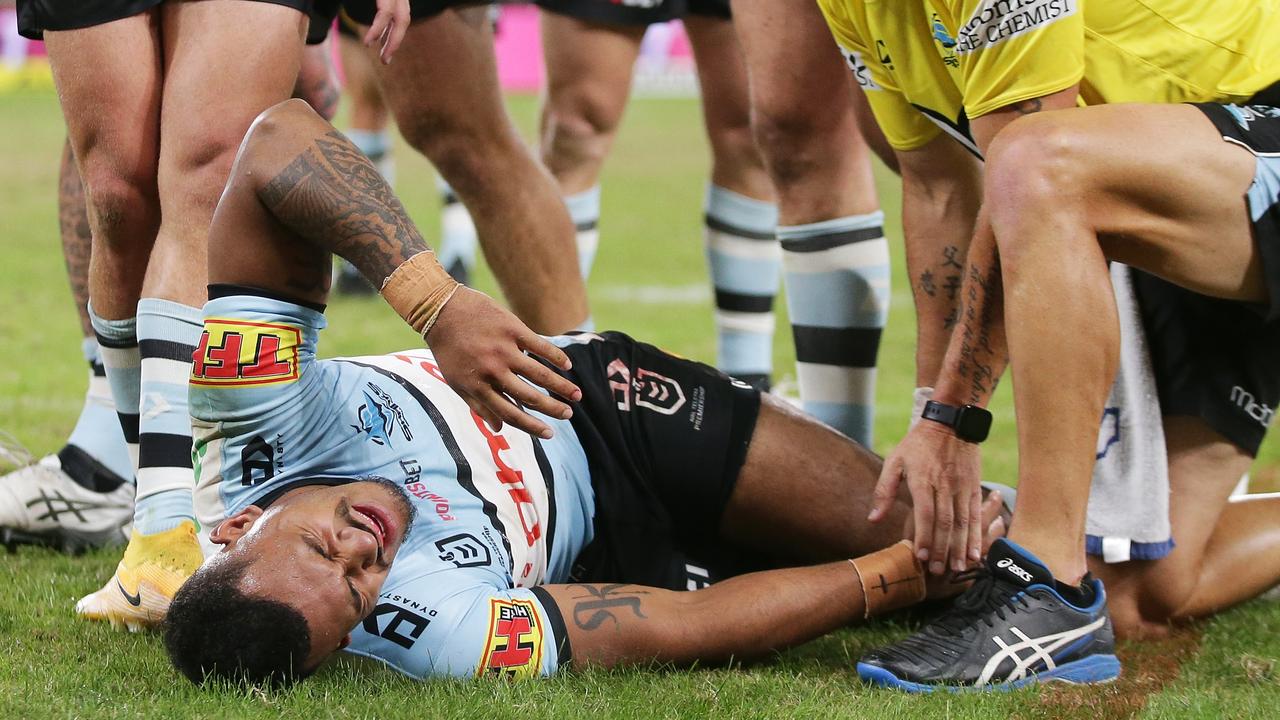 The NRL is now seeking urgent advice from medical experts.

There are two schools of thought about the increased number of injuries.

Is it the new rules, the faster game, and the fatigue?

The breakneck speed with fewer stoppages.

Or is it the fact clubs and doctors are now being so vigilant with concussion treatment.

Players that were sent back out after a HIA in previous years are now being treated more conservatively.

“We want clubs to continue to do the right thing but we don’t want to tip the scales the other way where teams are left in a position with no reserves,” Newtown said.

“You can’t have a situation where for half a game there is no-one left on the bench.”

There is an argument that the quality of some games is being affected by the number of injuries.

Many would have turned off the Eels v Sharks game when it became obvious the Sharks couldn’t compete under the new rules without reserves.

The Daily Telegraph has obtained a copy of an injury surveillance report into the 2020 season.

While injuries overall were down – there were fewer games – the number of knee injuries almost doubled.

Time of game injuries were sustained.

There were 10.8 serious knee injuries in every 1000 hours of football last season compared with only 5.8 the previous season.

Interestingly injuries were up in the third 10 minutes of each half, when fatigue sets in and fresh bodies are coming off the bench.

Not surprisingly the NRL has never publicly released the report.

It’s the last thing they need in this time of crisis.

ARL Commission chairman Peter V’landys wants irrefutable proof that the explosion of injuries which has marred rugby league was caused by increases to the speed of games.

“Give me an instance?” V’landys asked.

V’landys’ comments come as a leading Australian sport doctor called for the NRL to consider introducing an 18th man sub for any injured player.

An ARL Commission board meeting tomorrow will discuss whether to introduce the 18th man substitute for concussed players.

NRL clubs suffered horrific injuries in round three but V’landys dismissed suggestions the players were hurt because of rules that have increased in the pace of games this season.

Not all agreed with former NRL player Cameron King tweeting: “I hope all these rule changes which are for entertainment purposes are worth it because this is carnage and it’s round three. #playerwelfare.”

Leading Australian sports doctor Nathan Gibbs wants a substitute on standby for any injured player, not just those who are concussed.

“Have a sub for any injury,” Gibbs said. “Let’s not just worry about concussion. An injury sub should be allowed if you lose a player for the match. There will be times when one isn’t enough, like Canberra.

“You can’t account for every scenario but one reserve would be a start. That would help. The game is quicker but I think teams this year have had a better opportunity to prepare for it.

“Every year in trial matches, we get a lot of injuries. That’s because the players are getting used to the speed of playing football compared to trying to recreate that in training sessions. This year there was only one allowed trial match because of the shortened off season through COVID.

“You often play three trial matches. So those early matches in the year, which were often trial games, are now early-season NRL games. It’s definitely more common to get injuries early in the season.”

The AFL has controversially introduced a medical sub this season that can be used when club doctors decide if an injured player will be unable to play a game in the next 12 days.

Despite the high injury toll, V’landys said the NRL would not react until all injury data had been examined.

“We also had a shorter preseason with a lot less trial games. The game is taking concussion a lot more seriously. We are taking it to another level. We look at data every day and we review it after every game.

“The injuries (this year) are on average with what they have been in previous years. Everything has to be done with the appropriate data and information to back it up.

“We are privy to information people don’t get so we can see if it’s an issue or not. I’m not ruling it (an 18th man) out but I am one of seven (commissioners) and management will have a say as well. I’ve got an open mind and will try and do what is best for the game.”

Prompted again about the 18th man proposal, V’landys said: “If it’s serious enough, we will consider it.

“That’s one of the things we take pride in, that we are agile and make decisions when they are needed.”

“If you get two or three (concussions) in a game, the next minute you’re playing with 14 men or even 13 men with no one on the bench. That is putting stress on blokes to play longer minutes, which leads to injuries,” Foran said.

“The amount of injuries from the weekend was unbelievable. (A concussion sub) would be something the league would have to look at. There is food for thought.

“If we’re dead serious about player welfare, and with blokes having to play on because there’s no one left on the bench, what risk is that putting on players’ bodies? Player welfare is paramount, with all the research being done and the protocols there for HIA and head knocks.

“But I do think the game is doing an incredible job around HIA. I don’t know the statistics but there seems to be a lot more now than in the past or maybe we’re just more aware.”

“I think we should be looking at something,” Bellamy told The Big Sports Breakfast Weekend.

“There are better brains in the game than me to sort this out but I think we need to do something where if you have two or three HIAs, if the player goes off and doesn’t come back on, if we had an 18th man that could come on, then it would take a little of the burden off.

“We just need to do something.”

The big wet had its impact on the weekend

More than anything else