The NRL has begun a series of secret meetings with clubs detailing plans to transform the game, 7NEWS can reveal.

Every aspect of the competition is set for a radical overhaul in coming years - including expansion to 18 teams and a conference system to split the NRL in two.

7NEWS understands clubs are on board with the concepts, with overwhelming support from coaches and club chief executives.

South Sydney were the latest to hear the pitch, listening in on Tuesday morning.

The planned overhaul includes a 17th team entering the competition in 2023 before an 18th team follows in 2026.

Multiple groups are bidding to win the licence to become the NRL’s second team in Brisbane, where the Broncos have dominated for 30 years. 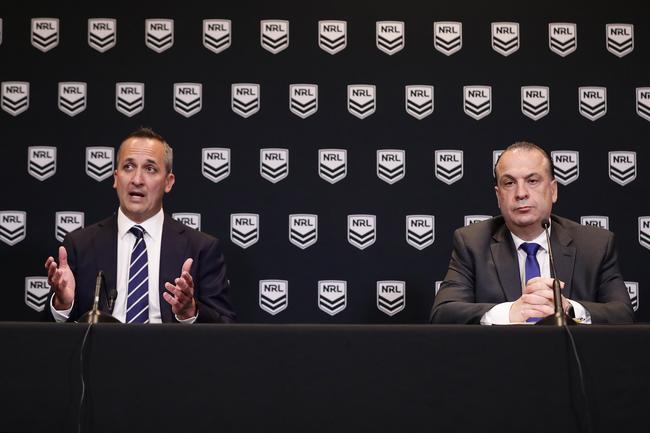 The NRL is proposing a full overhaul of the development pathways to ensure there is enough talent to support two more teams.

Clubs will be forced to invest in their juniors.

Funding will also be provided so clubs can have all three grades play at the same ground on the same day.

And an NFL-style conference system, splitting the teams between Sydney and the rest, could be implemented.

The conference winners would then play off in the grand final. 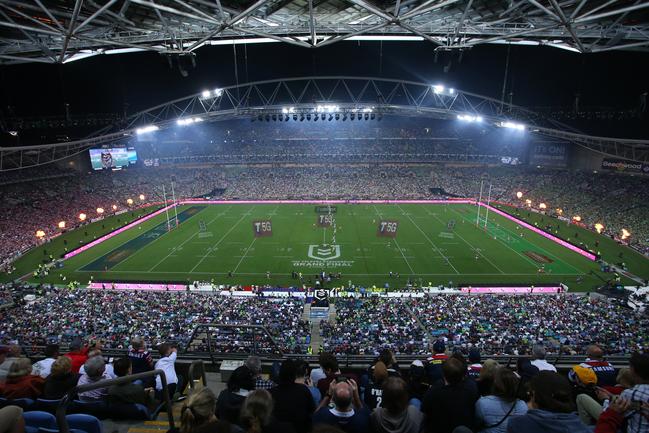 The idea of conferences was first seriously floated during last year’s COVID-19 shutdown, as the game tried to restart safely during a shortened season.

But while administrators eventually took a different option, they never completely went away from the idea.

The benefits would include more local rivalries, while it would theoretically even out a competition that is now not entirely equal given each team only plays eight others twice.

South Sydney coach Wayne Bennett has long been a fan of the idea, and backed it in an interview last month.

“I think they should play in conferences, I’ve always argued for conferences,” Bennett said at the time. 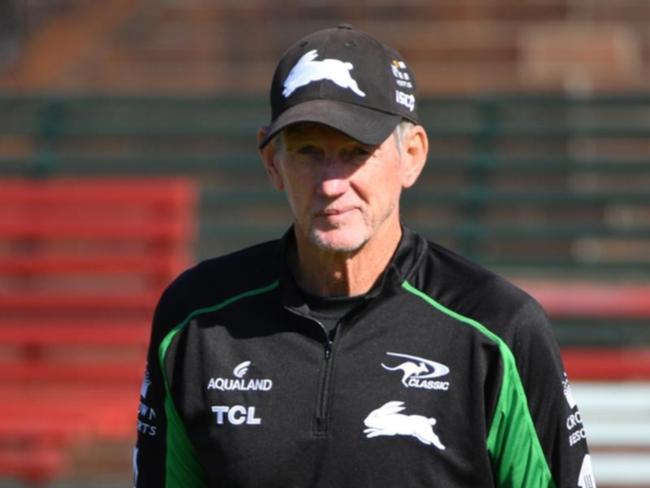 South Sydney coach Wayne Bennett has long been a supporter of the conference system in the NRL. Credit: AAP

“I think Sydney do themselves a great disservice by not playing each other on a regular basis home-and-away because that’s what the fans want in Sydney.

“(Sydney fans) embrace the national league but they also embrace the club rivalry and unless you’re living in Sydney you don’t realise how strong it is.”

The NRL plans to utilise the conference system to create rugby league’s very own version of the Super Bowl.

The ARL Commission is believed to be confident the changes could deliver a major boost to crowds, ratings and money - when the time comes to negotiate the next broadcast rights deal

Not a fan of conference set up.

Sounds a bit like a Sydney conference and super league

Agree. Not keen on conferences… we don’t have 50 bloody teams.

Each team plays each other once. Plus Finals.

Top 6 go through to finals. Next 6 play a knock out series for the final 2 finals spots.

Throw in SoO and Internationals at the end of season.

Has advantages and disadvantages. Putting aside the conference stuff, I’m not sure there is enough talent for 18 teams in the near term.

We don’t play every team home and away now so why are you guys anti conference?

Yeah, probably the only diff to now, is where it’s only random / related to previous season in terms of who you play once vs twice, that will now only account for out of conference games

Absolutely bloody pathetic. These dickheads at the NRL are really hell bent on ruining the competition aren’t they?

Conferences are an unfortunate necessity in America where all their major sports leagues have either 30 or 32 teams. That doesn’t mean it would be suitable here or be a panacea for rugby league’s ills.

Here are two reasons off the top of my head I despise conference setups (but it would depend on how it’s implemented.)

Seriously I fucking hate it. There must ALWAYS be one premiership table and at the start of every season every possible permutation of Grand Final matchup should be possible. If every year it’s guaranteed that a Sydney team vs Non-Sydney team meet in the grand final they can get fucked. I’m out.

I hate the idea of conferences. How can you measure the team if you don’t meet until the GF.
Fuck Americanising our game.

Happy for this in principle. Like the ideas of 18 teams, 3 grades on-game day and groups of Sydney v Regional

Happy for it to remain as Top 8

The key question is the comp 16 rounds long or 25 rounds ?

The issue with 3 grades is that the Cowboys for instance have to fly 3 teams around the country every other weekend.
Do Melbourne even have 3 teams?

Why are the NRL trying to recreate the wheel nowadays?

I’m a big fan of this, I just don’t love the two conference winners playing off in a super bowl.

I think there should still be a finals series of eight teams, drawing the top three from each conference plus the two next highest ranked teams from either conference.

That way the teams that deserve to be there get there every year, rather than an arbitrary system that sees somebody sneak in from either column as long as they won just enough throughout the year.

This system allows us to delve into the rivalry between the Sydney sides, and the regional teams in many cases will benefit from reduced travel, particularly the QLD sides.

The issue with 3 grades is that the Cowboys for instance have to fly 3 teams around the country every other weekend.
Do Melbourne even have 3 teams?

Regional teams would be given a travel allowance

Melbourne use the Sunshine Coast as their RG team. And then pump VRL money into their U21 and U19 teams to fly to NSW

I agree. I loved the Sydney comp and hated the national one. We only play the Storm in the finals which is an added bonus.
Seriously, who gets excited when Souths play the Warriors, Newcastle, Titans , Raiders etc.

I think the NRL rather then making all these decisions should reach out to the fans who are the only reason the NRL actually exist and get there view on it. I personally like that clubs get to challenge themselves against ever team and would find it boring playing the same clubs multiple times.

I understand why they want to do it though. More home games. Fans can attend more games because it’s all in the state which means more revenue for the venues, NRL and clubs. It all comes down to money in the end and profit.

Looks we are evolving back to the QRL and NSWRL competitions

Creating an artificial barrier that could very well prevent the two best teams of any given season meeting in the grand final if they both belong to the same conference.

It would be impossible for Souths and Roosters to play in the superbowl-like grand final.

I am anti conference because we don’t play every team now. 18 teams, or even 20, makes for a level playing field with everyone having the same opposition.