The NRL is about to enter talks with free-to-air networks to chase a new TV deal that may not involve Channel 9 but could deliver the game a $750 million windfall from the end of next season.

Nine negotiated a cut-price broadcast deal midway through last season at the height of the COVID pandemic when there was concern about the viability of media companies and the future of all sporting rights around the world.

Nine’s deal is up at the end of next season and the NRL can’t just sit back and wait. They have locked in a seven-year agreement with Fox Sports but need certainty around a free-to-air arrangement for three weekly games, the grand final and the showpiece State of Origin series.

Nine is in a senior management transition stage with chief executive Hugh Marks standing down and the board still interviewing several candidates to replace him.

The network had a rich history in cricket broadcasting but pulled the pin two years ago. There are fears they could so the same with rugby league to save money.

Channel 9 has acquired all rugby union rights for Stan, its subscription streaming service, and is heavily promoting its launch during the Australian Open.

They are becoming known as a rah-rah, netball and tennis network rather than for the major sports.

The court verdict on Seven’s bid to dump cricket will determine their buying power for rugby league.

In these days of multiple channel free-to-air broadcasting, Seven has the capabilities to cover both league and AFL during winter months and completely dominate all markets.

Although Nine has a contract for two more seasons, there is no legal issue with the NRL going into the market and fast-tracking talks to find a new partner from 2023 and beyond.

Both ARL Commission chairman Peter V’landys and CEO Andrew Abdo declined to comment because of sensitivity around the Channel 9 relationship.

Check out all the latest NRL chatter and more in Australia’s hottest sport gossip column.

Western Sydney Wanderers have taken a strong stand against the promotion of sports betting on game days. This is a touchy subject because all sports rely heavily on corporate bookie dollars. WSW will not accept any sports betting sponsorships this year.

“Gambling is an issue that concerns many in our Western Sydney community, and we’re really excited to have this opportunity to raise awareness of gambling harm and reduce the amount of betting promotion our fans are exposed to,” CEO John Tsatsimas said.

Channel 9 has again shown rugby league is not a priority. The network has used the first week of the Australian Open in a saturation promotional blitz for its rugby union coverage on Stan. Not one mention of the upcoming NRL season. It’s why the NRL is anxious about finding a new free-to-air station once Nine’s deal runs out at the end of next year.

Which league CEO is under enormous pressure to keep his job after falling out with his chairman and directors over a number of issues in recent weeks?

Benji Marshall should be at Canterbury this season — not South Sydney. We can reveal Benji agreed to terms to head to Belmore but the deal fell over when Andrew Hill was dumped as CEO in January. No-one at the Bulldogs would honour the agreement so the old superstar No.6 rang Wayne Bennett to get a gig at the Rabbitohs.

What is it about car sponsorships and Manly Sea Eagles? We revealed this week Brookvale Mitsubishi is no longer providing cars after ex-prop Addin Fonua-Blake returned his SUV on the back of a tow truck after a bad smash. Suttons at Artarmon and Brookvale Mazda have also cut ties in recent years.

What is it about halfbacks and jet skis? We have shown you pictures previously of Bulldogs No.7 Kyle Flanagan scooting around Port Hacking. Last week it was Rabbitohs half Adam Reynolds with daughter Zariyaa off Kurnell.

Dave Warner with his three kids and mad mate Trent McDonald at ten pin bowling last Sunday afternoon at Mascot. Warner was overheard blaming his groin injury for getting beaten.

Sonny Bill Williams has been given a specialist’s clearance to fight both AFL star Barry Hall and rugby league warhorse Paul Gallen this year.

The surgeon who operated on the superstar footballer’s neck injury, suffered during his short stint at the Roosters, says he can start preparing for boxing.

He is under the care of one of the Roosters’ high-performance staff to get fit and will soon begin training with legendary boxing mentor Tony Mundine.

The plan — to be confirmed at a press conference in two weeks — is for SBW to have four fights this year. He will have a warm-up bout before stepping in against Hall and other warm-up before the fight against Gallen, a bitter showdown we’ve been waiting years to see.

At least the club is heavily invested in women playing rugby league. Before COVID, the Eels applied for an NRLW licence to field a team in the game’s elite competition.

All 31 clubs in Parramatta juniors have girls playing in under-6 to under-12 teams. Over a two-year period, they have had an 85 per cent growth in female participants.

They had more than 120 players register for the Tarsha Gale trials, the elite NSWRL junior women’s competition

Even the Eels’ new Kellyville high-performance centre has been built to house a professional NRLW outfit. Sadly, not all clubs in western Sydney are like this.

The Penrith Panthers had enough cash to pay out Anthony Griffin and Phil Gould. Enough cash to contribute hundreds of thousands towards the contracts of Josh Mansour at Souths and Waqa Blake and Reagan Campbell Gillard at the Eels. Yet they have inexplicably scrapped funding and withdrawn their team from the Tarsha Gale Cup.

The cost of running a Tarsha Gale campaign is no more than $25,000 a year.

ROOSTERS COOKING UP A WINNING RECIPE

They say the little one-percenters in professional sport can make all the difference.

This is why the Sydney Roosters have called on celebrity chef Matt Moran to help the players prepare for another premiership campaign.

Moran joined the Roosters on their north coast pre-season camp on Friday night to cook dinner for the squad.

The chef is a mad St George Illawarra fan but was more than happy to help out when contacted by coach Trent Robinson.

This was not about serving up the flash meals he is renowned for at his Chiswick, Barangaroo or Aria restaurants that are frequented by Sydney’s A-list and where the price of a great meal could break even the Roosters’ salary cap.

Players visited fresh food markets on Friday morning on the north coast and collected local produce to prepare for lunch.

Moran identified Luke Keary as a standout on the barbecue and said that Lachlan Lam made a great chimichurri sauce.

“They were all really impressive, asking lots of questions,” Moran said.

“And I’ll tell you one thing, they can all bloody eat.”

Canterbury Bulldogs will report a football club profit of $2.8 million at their AGM on Sunday – a remarkable achievement considering the effects of COVID, virtually no crowds, no sponsor until August and the fact the team ran 15th. The Bulldogs also received a leagues club grant of $2 million less than the previous year. It makes the decision to sack chief executive Andrew Hill even more difficult to understand.

KANGAROOS V ALL BLACKS ON AGAIN

Promoter Dean Lonergan refuses to give up on his dream of staging a Kangaroos v All Blacks hybrid game at the end of the season. It all depends on the rugby league World Cup in England and whether it goes ahead in October.

Although it’s a long way off, it seems highly unlikely players would be prepared to spend seven weeks in the UK with the obvious health risks. The All Blacks agreed to play last year and the NRL showed mild interest. With State of Origin in November, it was too difficult to schedule. The codes were offered $8 million each to take part.

Lonergan told The Sunday Telegraph he would have talks with both codes once a decision was made on the World Cup.

Fox Sports has secured the services of Dave Warner and Pat Cummins to join their commentary team for the T20 series in New Zealand starting on February 22. Isa Guha will host the five-match series alongside Brett Lee, Mark Waugh, Warner and Cummins. The matches will start at 7pm Sydney time and no doubt attract strong ratings before the NRL and AFL seasons start.

There’s always been concern about betting on major sports awards. That’s why the NRL banned betting on the Dally Ms after a plunge on Craig Bellamy to win Coach of the Year in 2019 resulted in charges laid against two men who backed the Storm coach with inside knowledge he’d won the award.

Last weekend there was a late plunge on Steve Smith to win the Allan Border Medal. The show was prerecorded at 5pm and went to air at 6.30pm. In late betting, Smith firmed from $7 to $3.75 on Sportsbet. However the bookmaking agency insists there was no suspicious activity and that both Smith and Marnus Labuschagne had been well backed in the countdown to the announcement.

In a huge coup for the Canterbury Bulldogs, recruitment guru Peter Sharp has quit the Parramatta Eels to join Trent Barrett at Belmore. The former NRL head coach is one of the most astute talents scouts in the business and will no doubt play an important role in Barrett’s rebuild.

NRL clubs face a tough sell to get fans back to the venues this season post COVID. It doesn’t help that Manly is charging $70 a ticket for a grandstand seat at their first home game at Brookvale Oval in Round 2. Even juniors are charged full freight to sit in the stands. These sort of prices would be half acceptable at Bankwest but not at old Brookie.

I posted a while ago that Ch 9 had lost it’s appeal and it’s “mojo”. It would be like a breath of fresh air if the rights went to another network as long as the knuckle heads who are slowly destroying the games image i.e. Warren, Gould, Fittler and Johns don’t make the transition. Alternatively if Ch 9 sacked the current buffoons it might just save face.

Me too apparently, because I missed that.

Nice to see Rooster Rothy giving The Scum a nice puff piece as per usual. 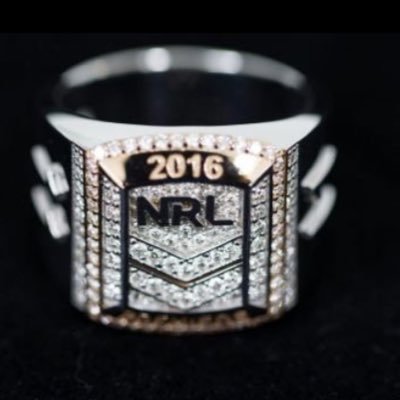 BREAKING: The Sydney club in secret talks for SIX months to snare supercoach Craig Bellamy ahead of the @brisbanebroncos and @storm dailytelegraph.com.au/sport/nrl/team… 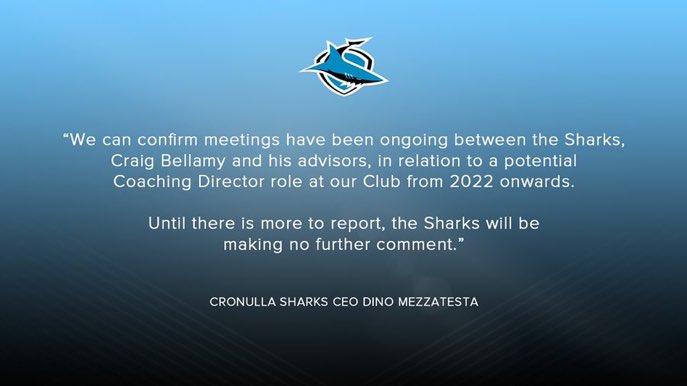 CH 9 is trying to re-invent itself by changing sports and therefore audiences. It should however re-invent it’s commentary and management teams, freshen itself up, make it more contemporary and representative of the population and keep the old sports.
The sports aren’t the problem.

Lol the Sharks are happy to leak and then confirm this story because it may help them find some credibility and look half professional by talking with Bellamy.

They need to lose the bullshit nationalism their presenters espouse. That would be a good start…every presenter talks and behaves like they’re in a fucking Mojo penned advertisement.