About 12 months ago, Russell Crowe and James Packer were on opposite ends of the world. Crowe was at his farm in Nana Glen. And Packer?

“My assumption was he was on a boat,” Crowe chuckles. “The further details I couldn’t tell you.”

The South Sydney co-owners were feverishly texting each other about yet another off-field incident involving an NRL player and their frustration about the never-ending cycle of bad behaviour and the damaging headlines that follow.

“Somehow, we have to reach people a little younger,” Crowe messaged Packer.

“Why can’t we?” Packer replied.

Crowe went away, approached Souths chief executive Blake Solly. Turns out, he was thinking about the same thing, too.

Crowe messaged Packer, presumably still on a boat somewhere on the other side of the world.

“You’re going to ask me to fund that f…ing thing, aren’t you?” Packer messaged.

The result of that conversation is the club’s Connect, Respect and Resilience Program, a million-dollar initiative that was launched earlier this week. 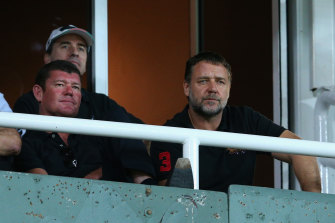 It is aimed at addressing mental health issues among Souths’ enormous nursery of junior talent, teaching and advising young players from the age of 13 about issues including how to treat women, drug use and gambling.

Essentially, the program attempts to cut the snake off at the head, addressing issues in the players’ formative teenage years instead of waiting until they reach senior level about the pitfalls of life and a professional football career.

The program will be spearheaded by the club’s experienced head of wellbeing, Jan Earl, and worked in conjunction with Souths Cares, who will employ a full-time mental health worker as well as other part-time staff.

“We sit back and see this happening again and again,” Crowe says of off-field misbehaviour. “Why don’t we try something a little different here? Dig a little deeper, start a little younger. Instead of waiting until we’ve got these players under our umbrella when they’re 19, 20, 21 years old, when they may have developed bad habits that are already hard to unpick, we are going to reach down through our junior clubs and start doing these classes for boys when they are 13. 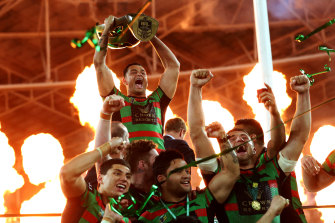 “The key thing isn’t to have some video presentation, not have someone make a speech, but to bring people in who have had these experiences to talk from a first-person point of view. We’re having people talk to them who have gone through experiences; whether it’s to do with respect for women, drug awareness, mental health, gambling … By the time they get to us at NRL level, we will have less problems.”

Souths, of course, are not immune to their own off-field problems. Most recently, favourite son Sam Burgess was arrested after allegedly failing a roadside drug test while picking up his children.

There have been previous claims from his former wife, Phoebe, of drug-fuelled benders and allegations the club turned a blind eye to it. An NRL integrity unit and police investigation into her claims remains ongoing.

Crowe politely declined to speak about Burgess, whom he enticed to Sydney from the north of England in 2010.

‘I’m not sure I’d use the word frustrated, but from a pure black-and-white business point of view, it’s not great.’

After taking control of the club in 2007, Crowe has doubtless seen the harsh reality of professional sport. The NRL is the ultimate dream factory, giving a life to young players from the lowest of socio-economic backgrounds.

But for every kid who does good – like, say, 2014 premiership-winning captain John Sutton – there’s plenty of others who slip through the cracks, caught in the bright lights of fame and fortune.

Sometimes, in those early years of Crowe’s ownership, former chief executive Shane Richardson would phone at an ungodly hour.

“We’ve very aware of the differences that kids have between households and what they deal with personally every day. I experienced a whole season with my son in the Souths juniors comp [with the Maroubra Lions], and witnessed games where the smallest kid in his side was 32kg, tackling a guy who was 96kg … We have a drain that starts in the game around 13 years old. By the time we’re at under-15s, we’ve lost 50 per cent of the players. Along with them go the mums and dads. We’ve got to stop that drain. The unease the parents have is the discrepancy between players on the field. We want our kids to feel safe.”

Reputational damage to the game has become the No.1 issue for ARL Commission chairman Peter V’landys and chief executive Andrew Abdo.

It was brought into sharp focus when Bunnings wriggled off the line recently as a major backer, costing the code millions of much-needed dollars.

Two years ago, after the so-called “summer from hell” in which rugby league endured numerous off-field incidents including the rape allegations levelled at Dragons prop Jack de Belin, Souths had two potential sponsors walk away from the sport.

An increase in fines has been mooted, although there are serious concerns from the Rugby League Players Association this will be enough.

Talking about education and welfare programs seems like a box-ticking exercise, but Crowe believes the cold reality is the Connect, Respect and Resilience Program will ultimately save his club money.

Surely, as an owner of the club who has sunk millions of his own dollars into the game, the tawdry incidents are an immense source of frustration.

“I’m not sure I’d use the word frustrated, but from a pure black-and-white business point of view, it’s not great,” Crowe says. “We’re putting a seven-figure number aside for this program, and we’ve got three years planned out. My vibe on this is that over time this costs me less money, if we do it this way.”

How Crowe isn’t on the commission baffles me

The program will be spearheaded by the club’s experienced head of wellbeing, Jan Earl, and worked in conjunction with Souths Cares, who will employ a full-time mental health worker as well as other part-time staff.

Great article and good on Russell and Packer for being proactive.

Exciting opportunity to join the Souths Cares team and help break the stigma associated with Mental Health whilst making a difference.

I think most of us here could qualify for the above job, we all profess to know the inner mechanics of the team & what makes them tick.