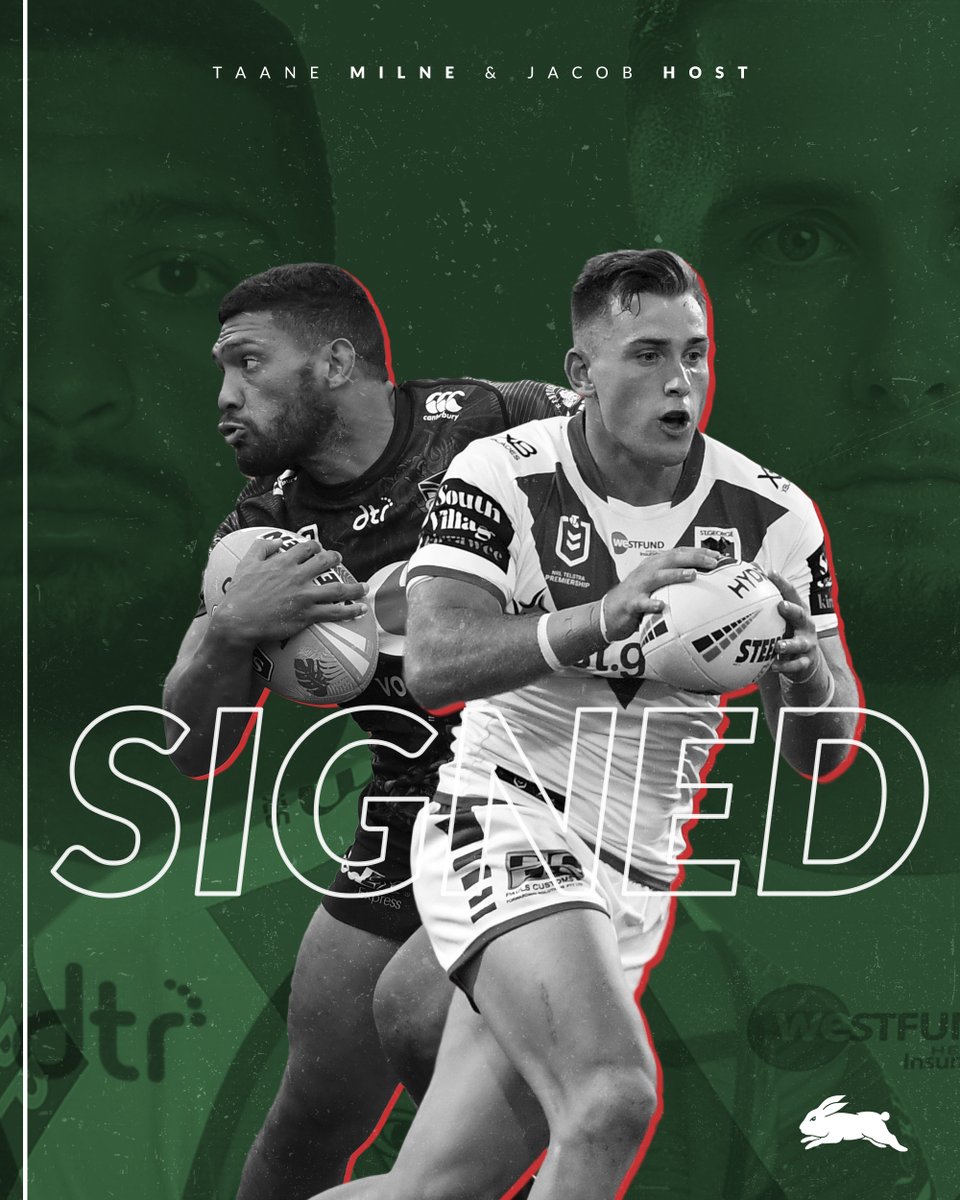 Host, 24, has played 51 NRL matches for the St George Illawarra Dragons since making his NRL debut against the New Zealand Warriors in round nine, 2016.

Host has previously been named in the City Origin squad in 2017, the Junior Kangaroos squad in 2016 and both the Australian Schoolboys and New South Wales under 18s squads in 2014. He was also part of Jason Demetriou’s NSW Cup premiership-winning team, the Illawarra Cutters, in 2016 where he was named in the NSW Cup team of the year.

Milne, 25, has played 19 NRL matches for the St George Illawarra Dragons and New Zealand Warriors since making his NRL debut on ANZAC day for the Dragons against the Roosters in round eight, 2016.

Milne has represented Fiji in nine Test matches, played for Fiji at the World Cup Nines in 2019, represented the Junior Kiwis for two years as well as the Australian Schoolboys Rugby Union team in 2013.

Rabbitohs Head of Football, Mark Ellison, said Host and Milne will be welcome additions to the Rabbitohs’ squad.

“Jacob comes highly recommended by JD (Demetriou) and he has been on our radar for a number of seasons.

“He has performed strongly for the Dragons in the opportunities he’s been given and we’re looking forward to him pushing for a spot in our top 17 on a weekly basis.

“Taane has had limited opportunities to impress in the NRL, but when he has been given a shot, he has shown he has what it takes to perform consistently well at the top level.

“We’re looking forward to having them join our squad for the 2021 pre-season and seeing what they can achieve under the guidance of Wayne (Bennett) and ‘JD’.” Got the members email this morning.

Do not know much re Milne but Host is solid and reliable and will add good depth to us and will definitely play some first grade in 2021. Host is an upgrade on Mago and Dillon. Host can play both second row and he can hold his own in the middle as well so could do a job off the bench for us. Host 24 is probs soon coming into his prime as well.

Milne has a very underwhelming resume.

So basically only 2016-17…18 games largely off the bench. Couldn’t crack a permanent starting spot at the Warriors or Merge.

Anyway, welcome. Hope the recruitment team see something the other clubs missed.

Milne is basically replacing Denniss as a depth signing

I get the impression that the club understands we have a very good rehab, medical team
We’ve thrown the dice for minimum cost at players like Ben Ross & Conner Tracy & it’s paid off with some value
If you can find players like Milne that cost you less than you put their fully fit value at & you’re prepared to work with them then it pays dividends
At worst you end up with a solid Reggies player & hopefully a good trainer

With the emphasis on “some”.

In both cases long time in rehab, a few games for us then off to another club.

Ben Ross might have played a full season I think, but from memory that’s after 2 years in rehab.

Then there are other injury specials like Greg Waddell.

I get the impression that Ross wouldn’t have been on much & added value greater than his on field contribution
I feel he was an asset to the club
He did play some decent footy
We essentially did a very good job of getting him back on the paddock
Same with Tracey
I think we would have kept both if we’d wanted them but I can only assume that they received better offers or we didn’t seek to renew them
But to be fair, you can only really ascertain that either deal was worthwhile from the club & knowing what was spent on them etc
Either way, both seemed like long term projects & were a credit to blokes like Eddie Farah & the high performance team, it probably stands them in good stead to repeat this type of thing if needed

Milne is a Jeremy Smith/ Beau Scott type player. I’ve watched him play in the St Merge system and he was as tough as they come. He hits hard and loves the tough stuff, he might be a pleasant surprise as a utility. Wayne and JD love their tough nuts and hard men.

I remember when Taane set the world cup on fire for Fiji, no team could contain him broke tackles and offloaded for fun out at centre. Not saying he’ll get to that level again or he won’t but i know he can play.

Your assessments of Host are spot on as well he was the only Merge forward along with Vaughan and Friz that impressed me these last few years. Both good signings for us especially if they’ve come at bottom dollar

So what was up with Milne?
Where’s he been?
What was the injury?

Milne has had injuries.
I followed him in NRL after seeing play in the juniors where he was dominant.
Best player at the crocs.
I know it’s only juniors but he definitely showed his potential at st merge that he’s got what it takes.
Definitely a good signing.
Expect a few sin bins and on reports if displays the aggression I have seen in him

I f’n HATED Beau Scott, which means he must’ve been doing something right.

Absolute hardarse mofo with more mongrel than a dog pound, I swear if he didn’t find his way into NRL he’d be a standover man for a bikie gang or something.

Welcome to the Mighty Rabbitohs Jacob & Taane. Happy to have you aboard as we head towards #22.

I feel like both are reasonable signings but i don’t expect either to challenge for our Best 17 at least immediately.

Host has potential but he was only the occasional starter at the Dragons and we have a far better standards here at Souths - He has work to do in my opinion.

I’m going to reserve any future opinion of Taane Milne because I never thought much of Auva’a and the rest is history - I think he has more upside than when we signed Reddy, Nielsen and so on.

I’m going to reserve any future opinion of Taane Milne because I never thought much of Auva’a and the rest is history - I think he has more upside than when we signed Reddy, Nielsen and so on.

I reserve all judgement til they played for us. And even then it can sometimes be til they end their career with us.

Some succeed, some do not. In other words do they fill the potential of what the club hoped for them when they serve the Red n Green based on their year or so contract.

Its pretty obvious that expectations per player will vary.

So until they end their tenure here, how well did they fulfil their role?

Get to know New Recruit, Taane Milne. After growing up in Redfern as a teenager, Centre Taane Milne finds himself back where it all began after having stints at both the Dragons and the Warriors. Milne links back up with Jason Demetriou where the two won an Intrust Super Premiership title with the Illawarra Cutters back in 2016. He looks 10 years younger without the beard.