Noticed they were charged

But can’t find the detail 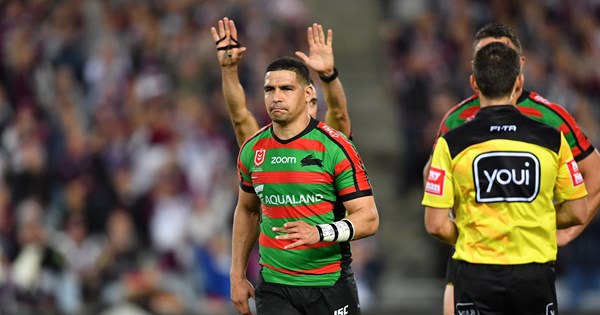 South Sydney linchpins Cody Walker and Dane Gagai are free to line up in next weekend's preliminary final against Canberra despite both being charged by the NRL Match Review Committee over incidents in Friday night's 34-26 defeat of Manly.

Gagai referred to as a South Sydney linchpin

So Goseiski can grab a bloke while he’s on the ground with 2 players on top of him and, bounce his head 2 or 3 times into the ground and that’s OK?
Just a penalty.
Sam did less than that and he got on report and missed a Semi Final game??

AND, because Gagai and Walker stood up for their team mate who was on the ground getting his head bounced, one gets 10 in the sin bin as well as getting charged a fine while the other gets a fine.
Where’s the justice?? or is it justus?

What about DCE ‘s crusher tackle on Cook. What about Jorge hitting Sam in the head and knocking him out.
Were any Manly players charged or just us.

I swear Jake gave Liam Knight an eyeball massage at one point. The teddy bear doesn’t get a mention in the media or MRC though.

That’s the biggie for me

DCE the crusher gets away with it. Probably because the media uproar over Trbojevic getting sin binned relaxes the MRC interest.

a pin passed through the end of an axle to keep a wheel in position.

Nothing to lose by challenging the calls. If anyone was to hint that these charges are a payback for Sam’s chat it would keep the shit flying at the MRC and NRL judicial process in the he media.

Gagai is very lucky not to be charged by Souths for bringing the Clubs reputation into disrepute.

On the whole, the media commentators have a different opinion of Dane’s abilities to most on here.

True. However, I’ll be astounded and disappointed if we re-sign him.

The MRC are scared of getting a call from Des as he gave it to Annesley in relation to the Jake T sin bin so no charges for manly.

With Manly out the point is moot , but if he was ringing Annesley how is that not a 10 k fine ?

Also throw in the fact that Hasler said that they got dudded.

there’s got to be an investigation !!

Walker & gagai are both free to play next week. No suspensions just fines.

South Sydney linchpins Cody Walker and Dane Gagai are free to line up in next weekend's preliminary final against Canberra despite both being charged by the NRL Match Review Committee over incidents in Friday night's 34-26 defeat of Manly.