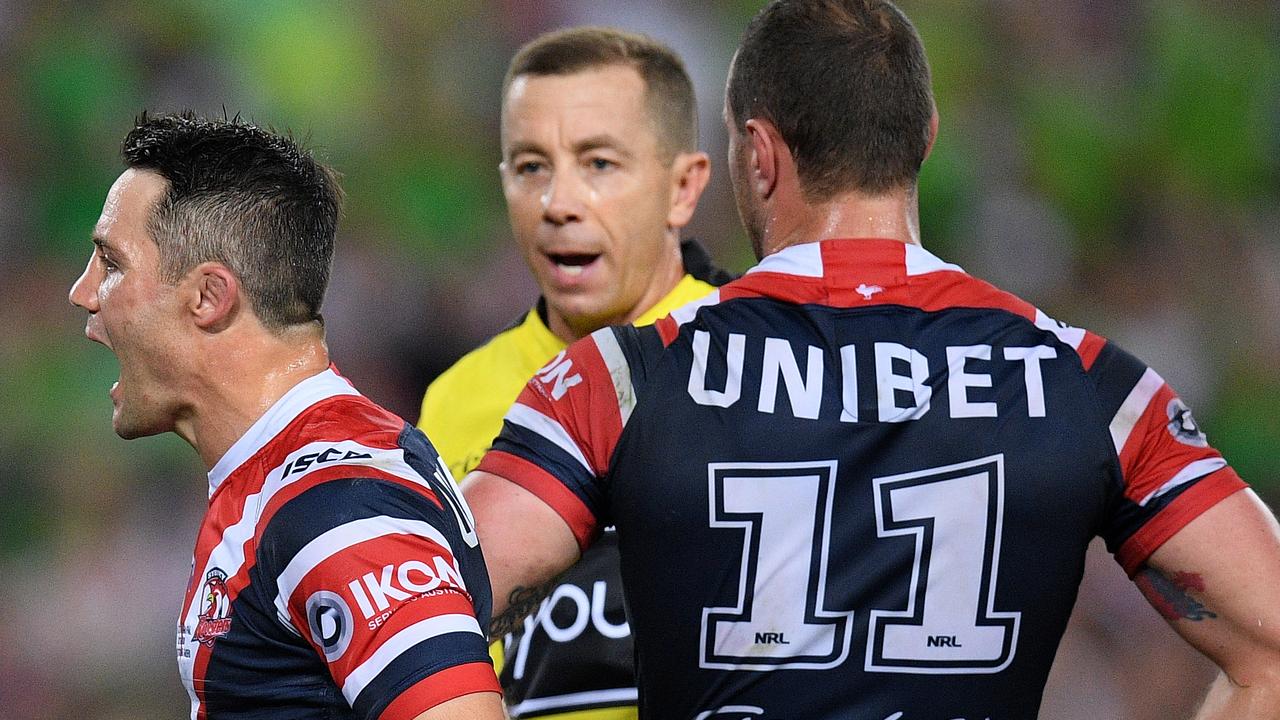 Cooper Cronk of the Roosters (left) reacts as he is sent to the sin bin by referee ben Cummins during the 2019 NRL Grand Final.1280×720

Cooper Cronk of the Roosters (left) reacts as he is sent to the sin bin by referee ben Cummins during the 2019 NRL Grand Final.Source: AAP

NRL referee Ben Cummins has finally spoken out about the abuse he copped after that fateful six-again call during last year’s grand final.

The senior rugby league official infamously called “six-again” to the Raiders but then quickly changed his mind, but Canberra player Jack Wighton had already played on and so lost the ball.

Many people believe the confusion cost the Raiders a premiership as the Roosters would then score a try to win the game in the frantic final moments.

Cummins has now spoken to the Sydney Morning Herald about that moment and the 12 months since, during which he and his family have been subjected to online abuse and threats.

The vitriol was so bad he had to “hide” for a week immediately after the grand final, then fled to Papua New Guinea for a month.

The NRL even called on police to patrol Cummins’ house following the game as a result of people trying to find out where he lives.

“I was ashamed, I couldn’t celebrate with my (referees) team in the hotel,” Cummins said.

“I had family in town for the game. I basically went home and went into hiding. I stayed at my house for a whole week.

“The local command got in contact and said they were monitoring the house.

“We were given a contact by the police we could call if someone was there.”

The abuse was so bad it affected Cummins’ mental health and he admits to contemplating suicide.

“I’ve thought about a lot worse than just walking away,” Cummins said.

“I’m not proud of it but I thought about it (suicide). I was in a dark place after the grand final. Being ashamed of your performance, there’s not a lot of people you want to talk to.

“If people could just realise what goes on inside your head when these things happen. Not just for myself but my family.”

Cummins said his son still gets bullied at school while his three daughters have been subjected to online abuse.

He wasn’t given the whistle for Friday’s grand final rematch between the Roosters and Raiders.

That sucks a lot, its just a game.

And the mistake wasn’t even that bad, just the context of when it happened and that Canberra lost in the following set made it worse

I’d also argue that Canberra were never cracking that try line. They were camped there the entire game and never looked like going over

End of the day, they are human. Except Klein.

You really change your opinion when reading this sort of stuff I feel sorry for him that all this happened, all the refs have a life outside of footy and don’t deserve some of the slack they get besides Klein he can go fuck himself I don’t care less what happens to him he deserves whatever he gets.

If Canberra holds no animus why would anyone else? Really tough for his family but I’m not surprised he found the people in PNG a blessing.

At the time I thought it was crucial decision in the match. What I can’t believe is that it was a deliberate act. He made a mistake then corrected it. In the end the call was right, but in the moment it changed the play.
The tripe that followed is a sad reflection on people. Who would want to do that job after seeing the aftermath of the grand final.

No referee or player or coach etc deserve this shit. It’s just a game!

It used to be “just a game”, but now it’s a huge billion dollar business… and if you screw up like that on the big stage in the corporate world, you’d probably be fired. Cummins at least kept his job.

These refs get paid extremely well, and I’d expect Cummins is on around $200K+, possibly up around $300K or more next year and beyond.

Yes they are in the public eye and cop a lot of flak at times, but if you can’t handle the pressure that comes with the job, then change your employment, simple.

Fuck me, the raiders had enough chances to win two grand finals.

Refs are human, they make mistakes. I think the current lot are pretty poor but could never believe they deliberately make the wrong call or are in anyone’s “pocket”.

The better football team wins the game 99.9% of the time.

I agree & the referees statistics are there for all to see with regards to win/loss etc under each referee. Some bias? Yes of course, but cheating i don’t reckon.

Who are the better teams? The ones that wrestle maybe

The ones that can put 60 on the chooks.

They are still above us on the ladder

Ahh ok, they are one of the better teams too.

Canberra blew it just like we did in the GF qualifier two years in a row.

Social media can be evil at times.

It’s the NRL that people should be pointing fingers at. Constant rule changes and more and more grey areas has made it hard for the refs. That though doesn’t explain Klein’s recent clangers.

Poor bugger, he should have been proud they got it right eventually, not ashamed. Everyone makes mistakes.

The media is the real villain for perpetuating this myth. They are completely responsible. Disgraceful.

It’s the bunker who should not get things wrong. It’s not rocket science, stick with the ref’s call unless something OBVIOUSLY wrong with his call. Everyone sitting in their lounge chair can see, but for whatever reason the bunker seems to want to unsee. There has certainly been some clangers. Someone should start a facebook page & name it “ The Fans Bunker” & have a poll on decisions each week.