Every good team has one and every struggling team needs one — find out which player at your NRL team is the enforcer.

News Corp Australia Sports Newsroom
To win a premiership you need a lot of things — a terrific fullback, classy halves, a hooker who knows how to steer a team around and backs that can run the opposition ragged.

You need a coach who can bring everyone together and forwards that hunt as a pack, and you need the team to stay hungry all the way through the season.

But as legendary enforcer Mark “Spudd” Carroll explains, “you need to have some nutcases in the house”.

Rugby league left behind the wild days of on-field brawls and brutal stiff arms a long time ago, but a team still needs an enforcer to contend for the title.

Carroll said the key was to channel the wild side and always keep it on the field. “It’s all about controlling your aggression,” he said. “I’ve been retired for 20 years and people, because of how I played, say things like, ‘Spudd, you’re not a bad bloke. I thought you were a maniac.’ I was!

“That was my job. My job was to search and destroy, but at the end you shake hands and get off and that’s it.”

These days the wild duels that Carroll had with Paul Harragon are gone but every club has its resident hardman who makes the opposition think twice.

The void left behind by Sam Burgess might not be filled for years but younger brother Tom did all he could this season and produced his best year in the top grade.

Out from under the shadow of his brothers, Burgess shapes as the Rabbitohs’ leader in the middle of the field.

“I think Tom had his best year in the game,” Carroll said. “You can’t create another Sam Burgess. There’s only one and there will never be another one.

“There are probably a few guys there, and I’m not going to mention any names, who need to roll the sleeves up. But I have high marks for Tom. He gritted his teeth and did a great job.”

The days when wingers were just guys who hung around footballers are long gone — now, the back three are among the toughest players in rugby league.

That’s the view of Mark “Spudd” Carroll, who believes wingers and fullbacks are close to the hardest men in the NRL.

“I’m going to blow a few minds here, because I’m going to give a few wingers a wrap — they do the hardest runs,” Carroll said.

“The hardest runs are when a fantastic kick goes into the in-goal, the fullback brings it out 5m from the line, the defence compresses, they’re there to bash the shit out of them and the first two blokes who have to run the ball up are wingers.

“You don’t see any front-rowers or second-rowers getting back there.

“Wingers used to be there to score tries. But you see how they’re built, there’s more fat on a chip, and they run hard, they run between shoulders and when they run they hurt. 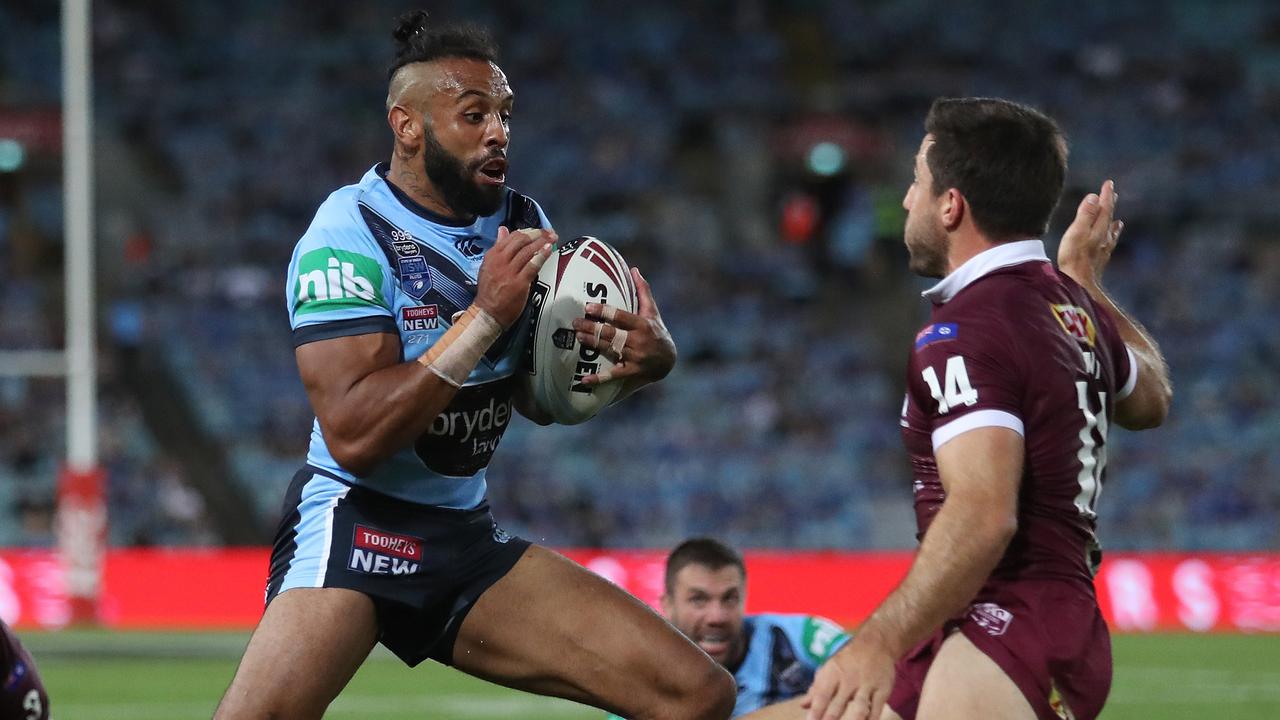 “They get hit by three blokes who are 100kg and if you don’t run hard you’ll get hurt.”

In recent years, a winger’s work in yardage has become just as important as their ability to finish tryscoring chances.

It’s gotten to the point where a team struggles to move the ball up the field without strong carries from their back three — even once the forwards do get back onside, the damage is often already done.

In his playing days, Carroll wouldn’t have stood for any talk about wingers being tough — but his attitude is as sure a sign as any that times have changed.

“Josh Addo-Carr, he’s one of my favourites because he runs that fast and runs that hard,” Carroll said. “I’ve always been a fan of Tom Trbojevic because he runs so hard through the middle, Josh Mansour is another one who rolls the sleeves up and rips in. James Tedesco is one of the tough guys.”

Tom may be a leader but he ain’t no enforcer. If we have one it’s Jaydn Su’A.

When they run at Tom they stay hit. He packs a good wallop. He pulled off some absolute cracking hits this season.

I know what you are saying, but the great thing about Tom is doesn’t matter who comes at him they generally don’t get any post contact meters.

He is just such a big Man.

Jai “The Plodder” Arrow will be our enforcer going forward.

Thats the thing that is most important and doesnt get noticed… Tom makes his tackles.

I dont think he needs to bend the line back with every run, emphasis on holding the ball is all he needs to do, as he always commits 3 opponents in the tackle

imo Tom Burgess played his best season for us by far this year. He was more athletic, played longer minutes and was very effective for us. His transformation was very noticeable.
The last few years Tom and, George too, looked too big and too muscle bound and the game looked to be passing them by. Their lateral defence was very limited and they seemed out of puff after 10 mins or so.
But, Tom has totally reworked his fitness and body to become one of the top Props in the game in 2020 and was very effective for us.

imo Tom Burgess played his best season for us by far this year.

As does every single South Sydney fan. Well played Tom.

He will end up as a way better player than George ever was, and if he stays healthy won’t be far off Sam by the time he hangs them up.