Following the decision of the Parramatta Eels to punt their cheer squad, NRL cheerleaders are uniting to defend an industry that has produced lawyers, doctors and Jennifer Hawkins

The first time Natalie Sinclair was asked to stay quiet about cheerleading, she was three years into a law degree.

Sure, on Sundays she was shaking pompoms for the Penrith Panthers but, given her $100 pay cheque covered not only game day but rehearsals, ambassador visits, everything — she considered the money well-earned.

Her regular visits to hospitals, coaching clinics, even just leaning over the fence to interact with complete strangers was all helping shape this Sydneysider who, now 27, works as a litigation lawyer for international firm Clyde and Co.

But back then what really mattered to Sinclair was being part of the game.

“I got to be involved in rugby league,” she said. 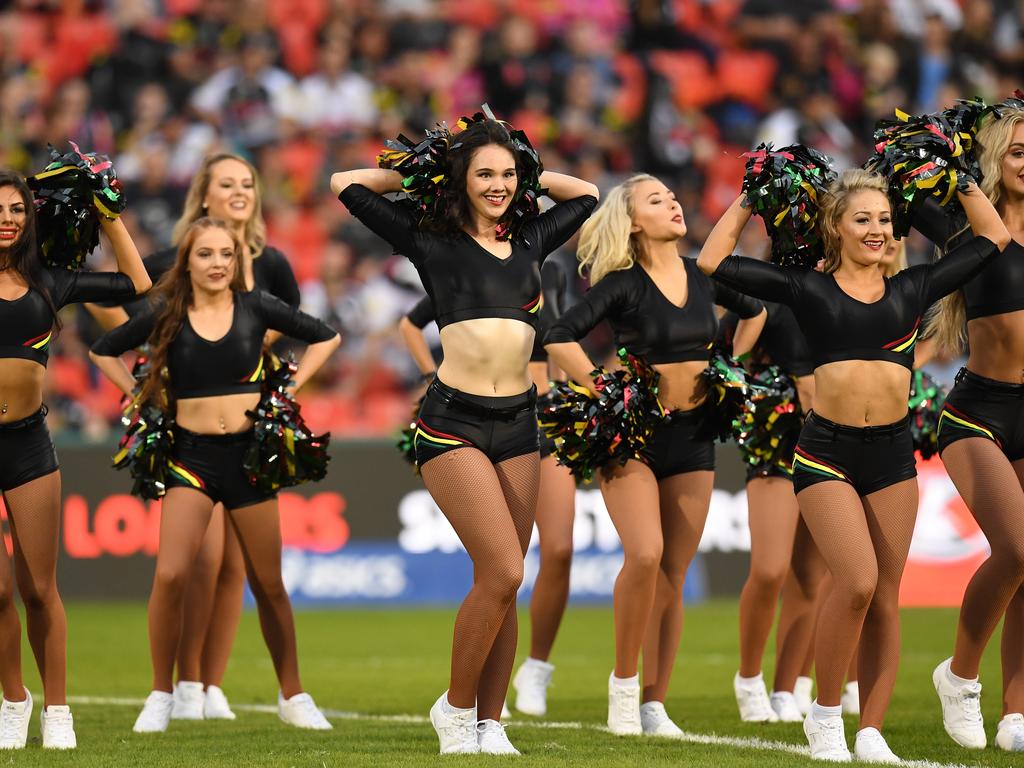 Indeed, the Panthers fan remembers being “obsessed” by it.

She recalled many winters of travelling to games with her parents and four siblings for the clapping, screaming rollercoaster that is being a footy tragic.

“So while it may sound silly,” she said, “my goal from the earliest age was to be a Panthers cheerleader … to be part of my club.”

It is a competitive game that sees at least 100 girls arriving at every club trial to compete for between 20 and 25 spots.

Yet, three years into her law degree, Sinclair was warned to stay quiet about cheerleading — or preferably quit it altogether.

“Because it was suggested to me that if law firms found out what I was doing, found out I was a cheerleader, they wouldn’t hire me,” she said. Yet instead of staying silent, Sinclair filled her social media with cheerleading posts — just as, the rising lawyer is willing to speak now.

This time she is fired up by The Sunday Telegraph’s revelation about the Parramatta Eels ending 50 years of tradition by cancelling their famed cheer squad for 2021, with whispers suggesting other clubs will soon follow.

There are five clubs without dancers on game day — a trend first started in 2007 by South Sydney owner Russell Crowe, who suggested fans felt “uncomfortable” in their presence.

But does rugby league lose when cheerleaders go?

Certainly the role is a coveted one.

Not only for women who, like Sinclair, want to be part of a club that’s part of them.

But also those like professional Sydney dancer Alex Dunlop — whose resume as a Cronulla Mermaid eventually took her global to work with the likes of Kelly Rowland — while fellow Shire alumni Kati Manning has spent the past year cheering for NBA franchise Denver Nuggets.

Elsewhere, former Knights cheerleader Jennifer Hawkins — estimated worth $12 million — is a name you may know, while Wendy McMahon, who set the bar for cheerleading during 14 years as Mermaids choreographer, was recently named among the Shire’s most influential people. 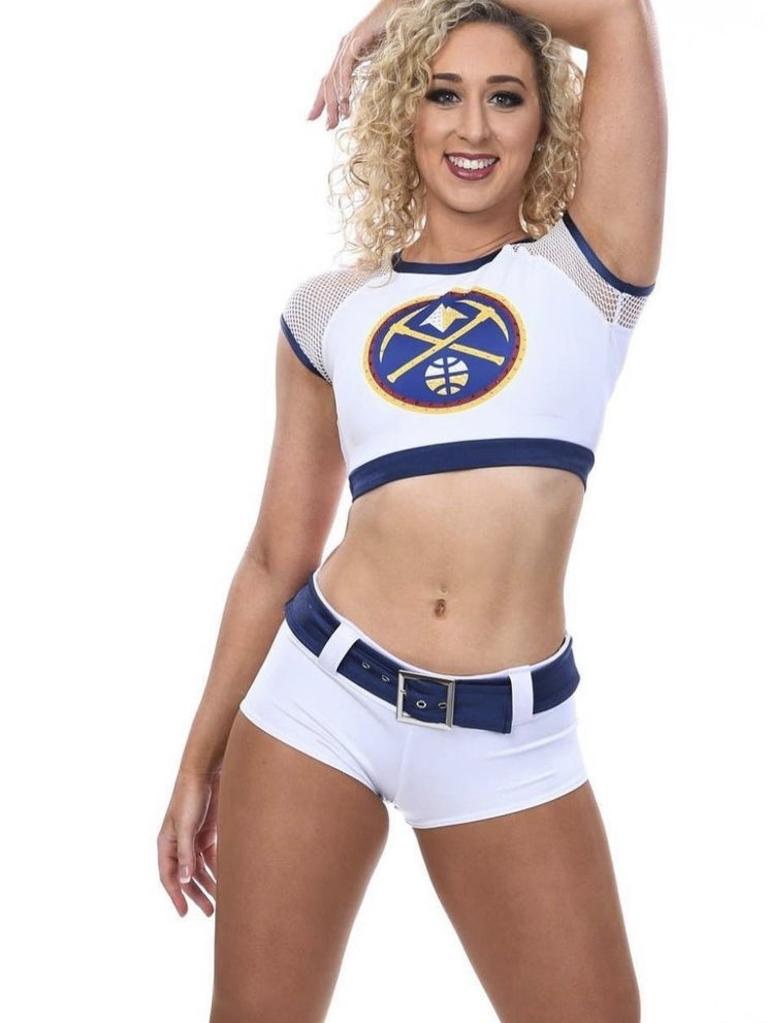 Kati Manning is with the Denver Nuggets. Jennifer Hawkins was a Knights cheerleader.768×1025

Jennifer Hawkins was a Knights cheerleader.

Indeed, so impressive have the NRL cheerleading ranks become, the Mermaids boast both sponsors and a pathways program, while the St George Illawarra Flames are a hip hop group also now employing both males.

“All of which represent an important part of the game day experience,” said choreographer Jacqueline-Lee Elliott, who oversees both groups and takes dancers annually to American training camps.

If cheerleading goes, the NRL risks losing women like McDonald, who would never have fallen so heavily for the code without it. “It was actually the way my family, mad Bulldogs fans, first got me to games,” she said. “It was the cheerleaders.”

Importantly, it was also through cheering that the journalist landed her first media internship at Bulldogs HQ.

Over at NSWRL head office, it’s a similar story for Caitlin Squillari, 27, whose years as an Eels cheerleader also played a large role in shaping the now Partnerships & Events manager.

A St Marys footballer from age five, Squillari spent seven years in the code until, at 12, she was no longer allowed play with the boys.

“And the pathways for women, they weren’t as strong as today,” she explained. “So I switched from footy to dance.”

Which wasn’t without its hazards.

“Dislocated my knee as an Eels cheerleader,” she grins. “But to see what’s happening there now, it’s so disappointing.

“There’s a saying that if rugby league is a present then cheerleaders are the gift wrapping — we’re just one small part of that excitement you get on game day.”

Of course, those who want cheerleading gone will point out that the short skirts and shaking of various assets exploits and demeans women. 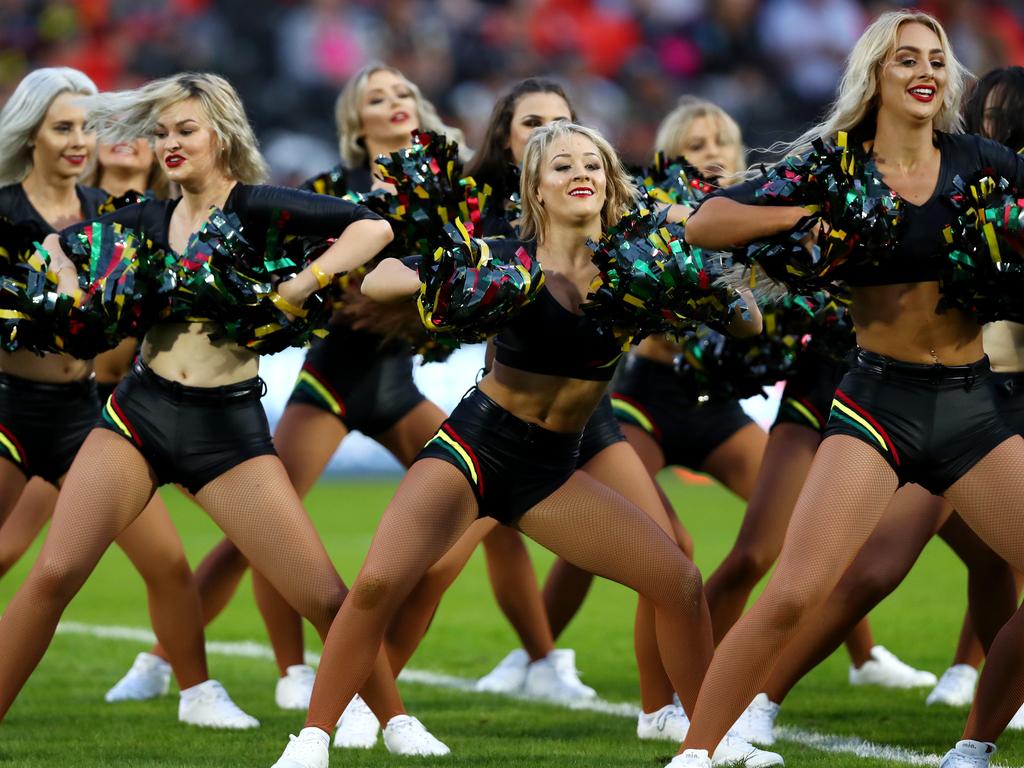 But Sinclair argues the removal of cheerleaders actually works against the rights of women, not only “demeaning” them but also removing a legitimate pathway to be part of rugby league, a future employment opportunity or simply grabbing their own little piece of the Greatest Game of All.

Now, if women want to crack ribs and bleed on the field, they can.

“But if I want to represent my club dancing, let me dance,” she said. “You take away cheerleading, you’re taking away a woman’s choice.

“And surely when it comes to promoting equality, the top priority is having women make their own choices.”

Sinclair also revealed how, in the same year she was told to stay quiet about cheerleading and didn’t, the role landed her a job.

“Because Brydens Lawyers sponsored Penrith,” she said. “So I called them up and explained exactly who I was — a cheerleader, in the third year of a law degree who wanted to get into the industry.

“And they not only offered me an internship, but soon after a paid job too.”

Wonderful to have a chat to @telegraph_sport this week about what a huge impact cheerleading had on my life- so happy to have my story out there together w @DarcieMcDonald and @clsquillari and I will forever be grateful for the Panthers and NRL cheerleading for where I am now ❤️ https://t.co/h0DXeBa0CB 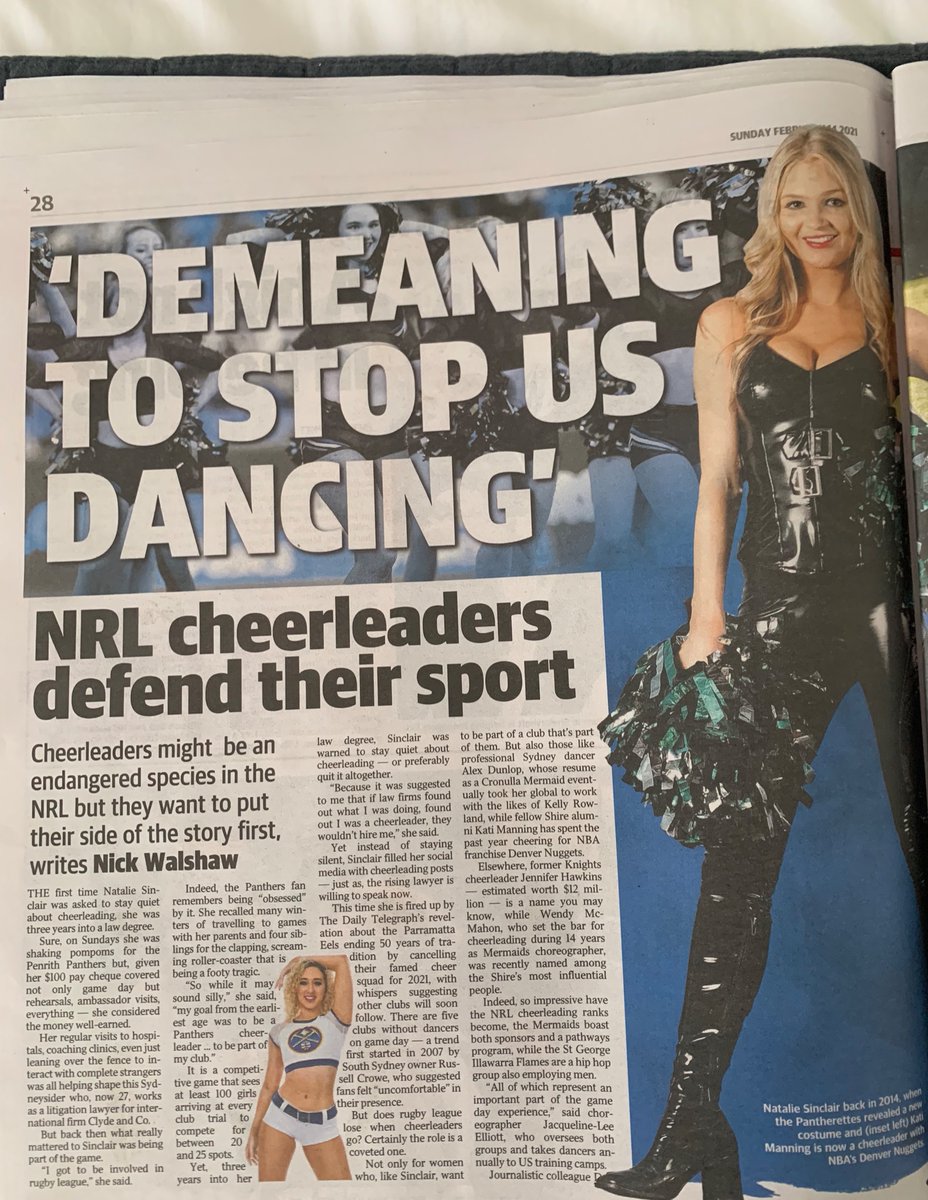 Instead of the never-ending NRL cheerleader debate, wouldn’t a better discussion be how we can have Tarsha Gale/BHP games as part of almost every match day? It’d meet the improved game day experience, give players a better stage and send message clubs say they want to send. #NRL
1 Like
GeorgeTreweek 14 February 2021 05:03 #3

Once again Souths ahead of the pack!

I still can’t believe Clint Newton used to date Jennifer Hawkins but dumped her, what a moron!!!

Incidentally, this would have to have been an embarrassment to most Souths supporters at the time?

Wasn’t here then obviously…not one of Crowes better moments.

Are you still here?

How’s that? I thought it was a great decision. Still do.

Yes, we moved into the 21st century about 20 years ago.

Wow I’m yet to meet anyone female or male in or out of the game who backed that shocker.

An early example of the cancerous cancel culture.

An early example of the cancerous cancel culture.

Get out your tin foil hats!

Stop hanging around all the knuckle dragers.

There are ramifications that the ordinary punter isn’t really aware of when they cancel shit on the back of so called political correctness and plain stupidity.

The Bulldogs were always provided cheergirls of all ages from a certain Dance group who took a bit of a bath when Castle pissed them off.

The numbers dropped the classes dropped business all round dropped .

Great for all the holier than though crowd not so good for a heap of young girls who just wanted to be good enough to cheer for the Bulldogs and show their skills in front of a big crowd.

I think it’s a fukin disgraceful decision and thought the same when Crowe done it.

I am still yet to meet a single person, male or female, who felt “uncomfortable” when the cheergirls were on the field dancing.

If the girls want to train hard, put in the work and get to game day and show off their skills to a big crowd then who on Earth would feel uncomfortable with that…

This was a howler by Russell.

Doubt you would even meet anyone with your personality.

You might not realise but culture isn’t fixed. It changes. We no longer send 12 year olds down coal mines, women and indigenous people can vote now, just to name a couple of things you may have missed.

Cheerleading is just dated and has been since the 70s. Good on Rusty. Cant remember if PHAC was involved with this too?

What a couple of extraordinary examples you use in comparison.

Comparing those to professional dancers, gymnasts, acrobats who your dumbass benefactor made redundant to show how “woke” he is?

Glad you aren’t my lawyer.

I’m not comparing those examples to cheerleading, they are simply to show that societies values change over time. If you want to see acrobats, gymnasts, dancers etc, go to a circus or ballet. Last time I went to the footy, comments I heard were not about their dancing ability, but their sex appeal.

Wasn’t aware I was in court?