Matty Johns has never seen the NRL so lopsided as it is this year and fears the salary cap isn’t enough to decrease the gulf in class and establish a level competition.

The salary cap is failing to stop the NRL from descending into a lopsided English Premier League-style competition where the big clubs dominate and struggling teams are unable to close the gap.

That’s the opinion of rugby league analyst Matthew Johns, who fears administrators will be unable to turn around the worrying trend, which has only been amplified in recent seasons.

Speaking on the Matty Johns Family Podcast, the Newcastle great said he didn’t believe the salary cap was enough to decrease the gulf in class and establish a level competition. 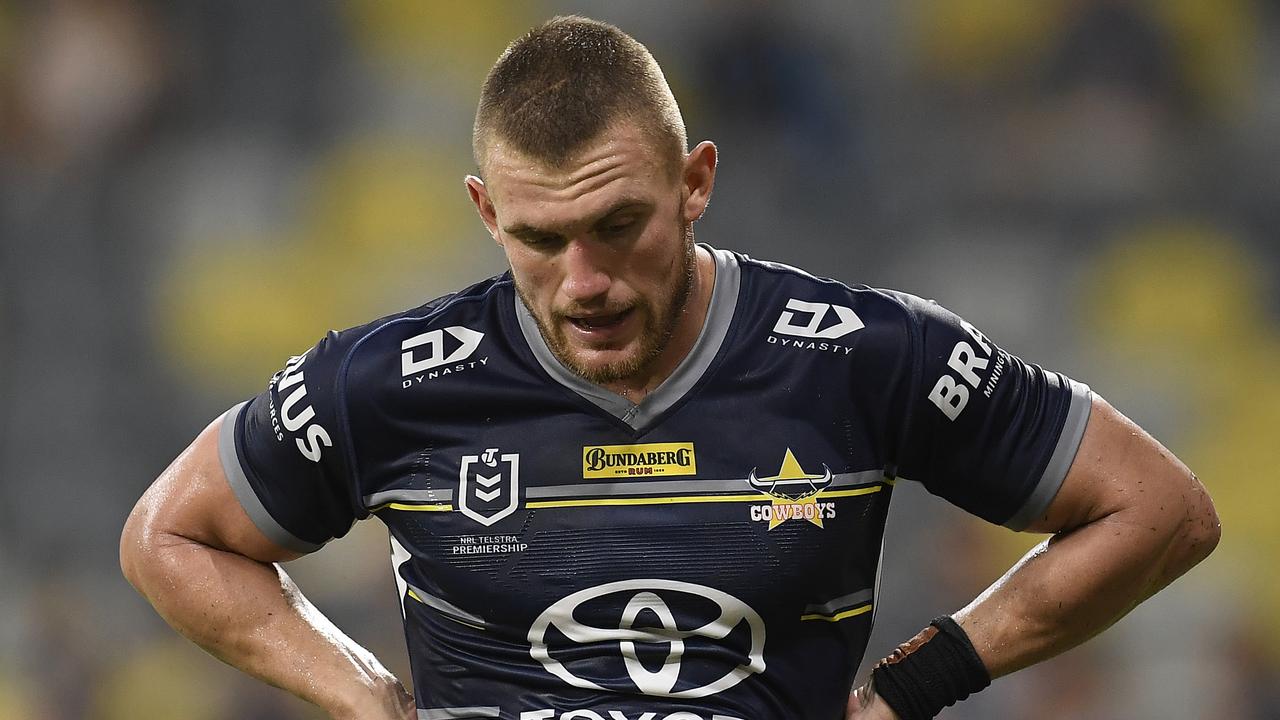 “There’s such a massive difference between the best teams and the bottom four,” Johns said.

“The salary cap was brought in to make it far more level, but this year it’s the biggest split between the best and the rest that I’ve ever seen.”

After only three rounds of the 2021 season, North Queensland, Canterbury and Manly remain winless and are already lumped with large negative points differentials after some heavy defeats.

At the other end, Penrith and Parramatta remain unbeaten, while the other usual suspects – the Sydney Roosters, Canberra Raiders and South Sydney Rabbitohs – have already flexed their might to take a place in the top eight.

Only traditional powerhouse Melbourne are out of the top eight currently, owing to a difficult start to the season against the Eels and Panthers.

The Gold Coast and St George Illawarra are the other teams who have emerged fresh in the top eight, but that’s come with victories over the likes of strugglers Brisbane, North Queensland and Manly.

“I think some of the lower teams have got a bit of psychological scarring when you don’t win for a long time, when you are on the end of a lot of floggings,” Johns said.

He also dismissed suggestions that exploiting the salary cap was a contributing factor to teams’ dominance, pointing to the Roosters and Bulldogs recruiting the likes Brett Morris and Nick Cotric.

“People always talk about the sombrero (in reference to the Sydney Roosters) and sly deals, but honestly, what it is, is that if you’re one of the top clubs, what happens is you get the best players at slightly under value,” Johns said.

“The best players want to play at the best clubs.

“The best example of that at the Roosters is Brett Morris. He’s playing for far less (than he could earn) just to be in a good team. The Bulldogs are finding it hard to score a point let alone get a win.1280×720

The Bulldogs are finding it hard to score a point let alone get a win.

The NRL has flirted with the idea of a draft to further equalise the spread of talent.

But Johns fears that unless officials get serious about implementing it, the competition will split further.

“There’s been discussions about external drafts and, at the moment, I can’t see it going ahead,” Johns said.

“I don’t know how it fixes.

“Each year we keep going ‘righto, who is the side that’s going to jump out of nowhere and really challenge the top sides. Over the last three, four years it just hasn’t happened. I don’t know exactly what the answer is.”

Its so obvious that this is happening, its the Super League all over again.

They want to start a new club in Queensland and there aren’t enough first great players now.

This has been happening since the game started. It happens in every sport.

Not so long ago Souths, the Raiders & Parramatta were easy-beats and the Bronco’s, Canterbury, St George, Cowboys & Manly were all up there with the dominant teams. Success is generally cyclical unless you happen to be Melbourne or the Roosters who aren’t subject to any salary cap.

Good to see that we’re now one of “the usual suspects” - i.e. a powerhouse club that is generally expected to be in the finals.

I’ll take that as a win for good longterm planning and recruitment, starting with Roy Asotasi, and continuing with the likes of (obviously) Sam Burgess and GI.

It’s been a long hard road, but it’s paid off. Being able to land stars of the quality of Latrell & Arrow is just a continuation of the momentum.

It is a cycle, the only 2 teams that have avoided it in the NRL era have been the Storm and Loosters, the Loosters have had the odd bad season but not an extended period out of the top 8, Brisbane was until the last couple of seasons.