A 16-month battle fighting a rare, inoperable hip cancer has come to an end for Jake Spurdle, whose short but fulfilling life inspired many, including his favourite team, the Rabbitohs. In the South Sydney Rabbitohs dressing shed on Friday night, 17 of the best NRL players in the game received a halftime dressing down by coach Wayne Bennett for their woeful performance against the Gold Coast Titans.

The verbal rocket that Bennett fired into his charges wasn’t your typical halftime talk from the ‘how to play rugby league’ manual, but instead it was a message of hope, will and determination from the heart – inspired by the one of the club’s most celebrated fans of the last 15 years, Jake Spurdle.

The Port Macquarie teenager, who died peacefully at his Lighthouse Beach home from an aggressive Osteosarcoma home on Friday April 23, was the catalyst for the side’s stunning second half comeback which saw his beloved Rabbitohs turnaround an 18-point deficit to overpower the Titans 40-30. It was an example of the profound affect that Jake’s life had on everyone he touched, that he was able to make the most unlikely of scenarios seem possible.

“I don’t know if you watched the game,” Jake’s mother, Nyky Napier-Reynolds, who is also a tragic South’s supporter, said.

“But we probably should have played better in the first half.

“So I think that was enough to kick them into gear.” 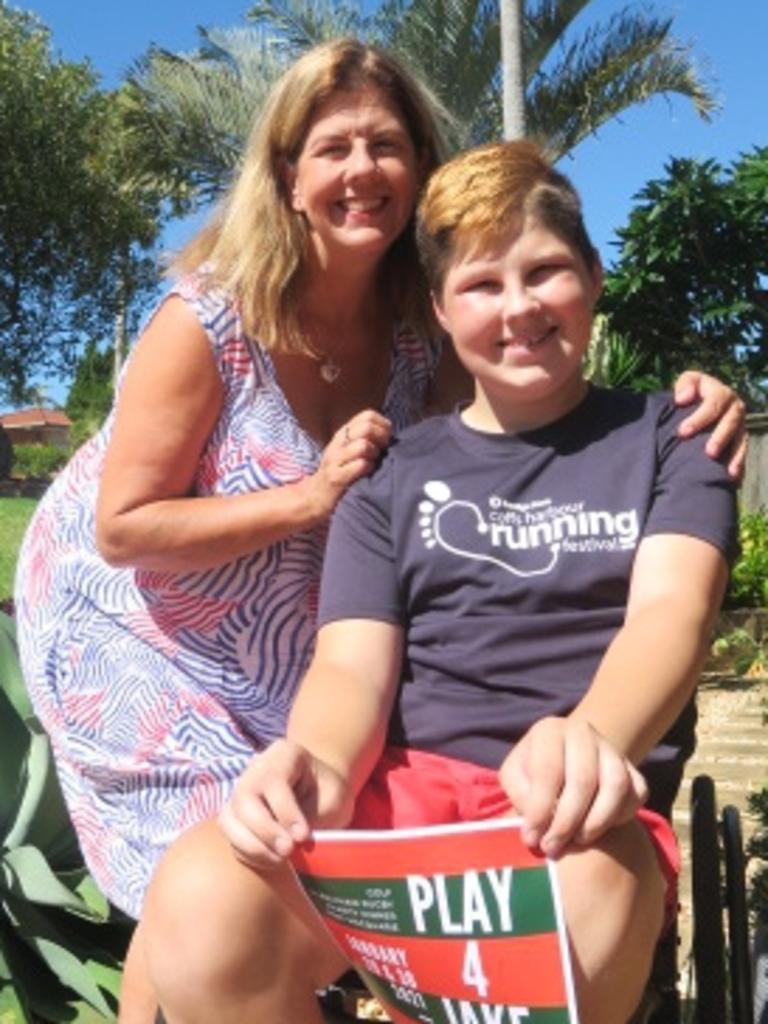 Jake’s mother Nyky, with Jake, at their Lighthouse Beach home in Port Macquarie768×1024

Jake’s mother Nyky, with Jake, at their Lighthouse Beach home in Port Macquarie 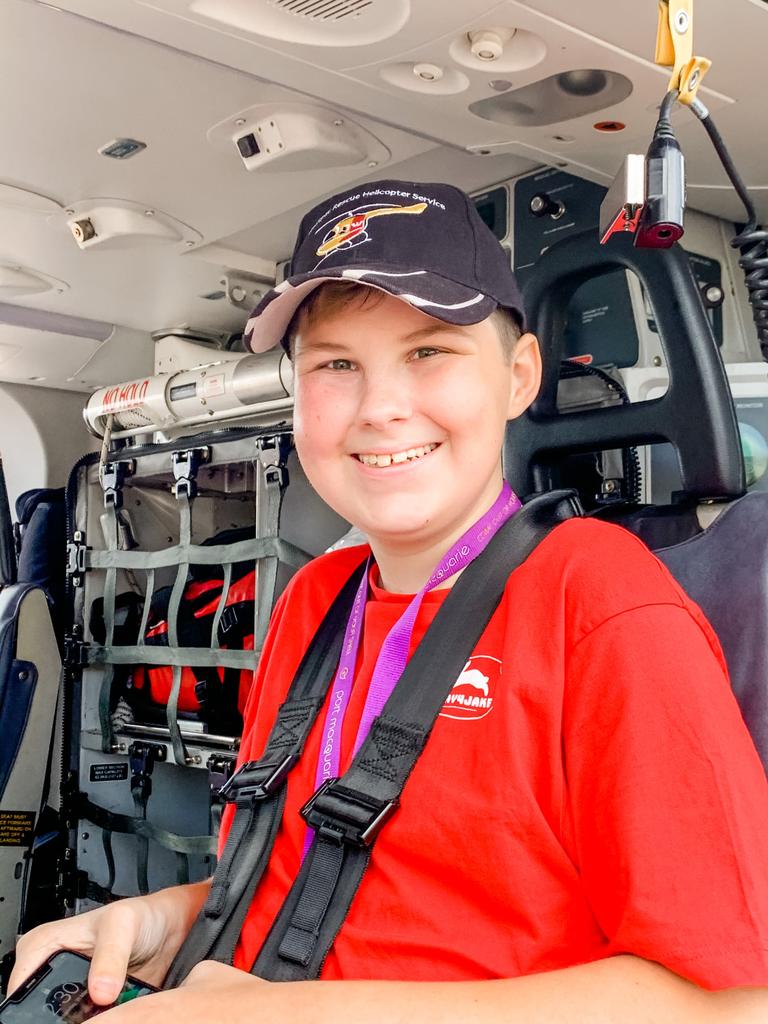 Jake Spurdle during one of his beloved bucket list activities earlier this year. Pic Supplied768×1024

Jake Spurdle during one of his beloved bucket list activities earlier this year. Pic Supplied

One man that shone bright that night, and who gleaned more satisfaction from the win than most, was play maker and Jake’s favourite Rabbitoh, Adam Reynolds.

Sporting a black arm band and Jake’s name on his wrist, the in-form half helped turn the Bunnies’ dig in for the 15-year-old the way he had done right throughout his cancer battle.

“It was heartbreaking to hear the news,” Reynolds said.

“Wayne [Bennett] made mention of him and we all wore black arm bands, I had his name written on my wrist … he was definitely in the backgrounds of our thoughts and when we weren’t doing so well we could draw some inspiration from Jake, and the fight he put in.

“It wasn’t good enough from us at the time, and if we could use that as a bit of an inspiration than it’s certainly done the job.” 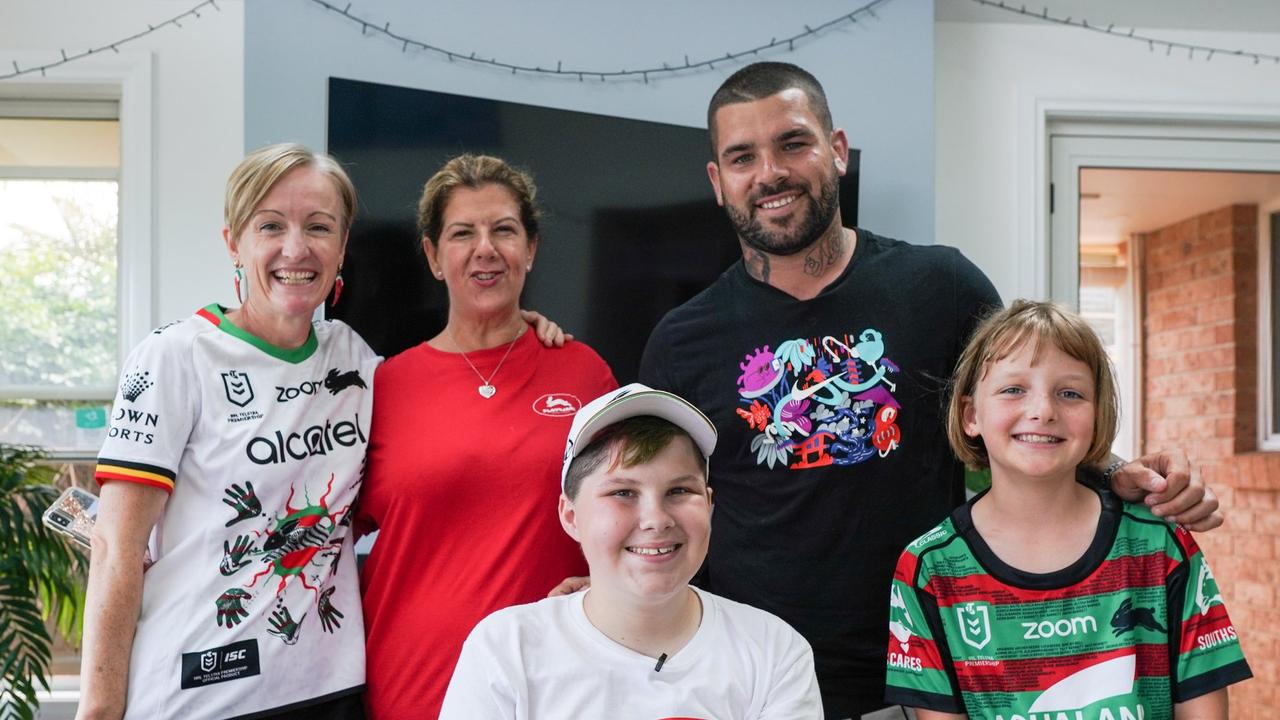 In the weeks before Jake’s death, Reynolds worked closely with the Play4Jake foundation, an organisation run by Jake’s mother, Nyky, and close friend of the family, Bron Watson, that was borne out of Jake’s rare diagnosis.

Reynolds spent time both at Redfern, and Port Macquarie, meeting Jake and providing his time to support the cause.

A self-described ‘timid kid’, Reynolds said he never would have been able to fight the way Jake did during his battle.

“What Jake went through and the way he went about it was pretty special,” Reynolds said.

“He took it head on and fought right to the very end and I pay my condolences to the family.

“I’ve got kids of my own, so I could never imagine going through that as a parent. They were such a lovely family to meet and I got a bit of time to spend with them up there [Port Macquarie]. Jake Spurdle during his treatment at the Children’s Hospital in Westmead. Pic Supplied768×1023

Jake Spurdle during his treatment at the Children’s Hospital in Westmead. Pic Supplied Jake Spurdle during his treatment at the Children’s Hospital in Westmead. Pic Supplied768×1023

Jake Spurdle during his treatment at the Children’s Hospital in Westmead. Pic Supplied

“To give back to kids that idolise you, it’s pretty easy for us [rugby league players] to do … to see kids smiling and enjoying themselves and for Jake to forget about what he was going through for that time that I was there [Port Macquarie], it was definitely worth the visit.

“For me it’s about giving back, I‘ve been fortunate enough to have a career in rugby league and make a difference to people’s lives and I’m very grateful for that.

Friday night’s match was a shining example of the fighting spirit that those who knew Jake, always seemed to glean from Jake’s positive presence.

From the day of his Osteosarcoma diagnosis in December 2019, his fighting spirit never wavered, despite the ups and downs that he and his mother endured over the last 16 months.

Jake put every last bit of energy he had into living life to its fullest, which most recently saw him participate in a number of bucket list items with the help of his tight circle of friends and the family’s loving network of Port Macquarie locals.

Nyky said Jake never spoke about the ‘D. I. E’ word, and at no stage did he ever contemplate when that day might come.

Instead, he persevered through ongoing and agonising chemotherapy and radiotherapy treatment, before that all became too much and the family transitioned on to a less invasive form of ‘compassionate’ care via the John Hunter Hospital. Jake was the first recipient of the treatment for a child of his age and condition which was administered by a private company called EnGeneIC at John Hunter Hospital, Newcastle.

The intravenous treatment, which was injected in to his hip, was never going to produce a life saving outcome, instead, it allowed Jake to live comfortably for his last remaining months before his batteries finally wore out.

On Thursday last week, Nyky said she could see the lights running low in Jake’s system and made a call to a his school principal to offer Jake his last wishes.

“Jake was sat at home on Thursday afternoon and he could not get his chin off his chest because he was so weak,” Nyky said.

“I told a little white lie to Jake, who chose to become a Catholic in year three, and called the principal at MacKillop Catholic College, Cath Eichmann, and asked if she and [school priest] Father Paul could visit Jake and she said yes. 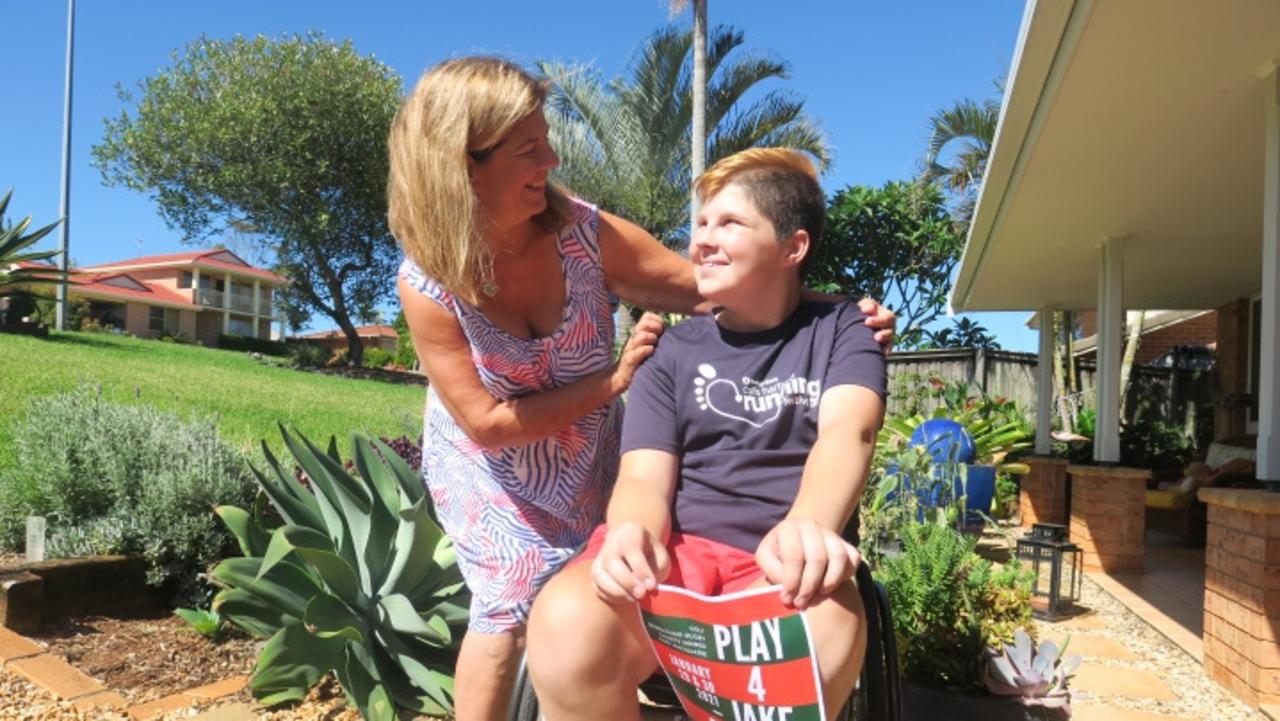 Jake Spurdle with his mother Nyky, who will continue to build the Play4Jake Foundation in his honour. Pic Daniel Mills1280×721

Jake Spurdle with his mother Nyky, who will continue to build the Play4Jake Foundation in his honour. Pic Daniel Mills

“So, they came and visited on Thursday afternoon … he was propped against the kitchen bench with his chin on his chest, he just didn’t really have the strength to keep sitting up – it was his way of fighting.”

“Father Paul said to Jake ‘are you able to do the sun of the cross’ which is what all Catholics start every ceremony with.

“We all sat and did the Lord’s Prayer, and Jake sat up quite reverently, which is what kids are taught to do church, he sat up, took his chin off his chest, and gained some strength from I don’t know where and looked at Father Paul while he blessed him and anointed him.

“It was really quite lovely.”

It was a significant moment for Nyky and her peace of mind, having been able to offer Jake his last wishes before he died peacefully on Friday morning at about 3:45am.

There will be a celebration at St Agnes Parish Church, Port Macquarie, at 2pm on Wednesday which Nyky has asked anyone who is attending to wear red and green, or anything with colour. 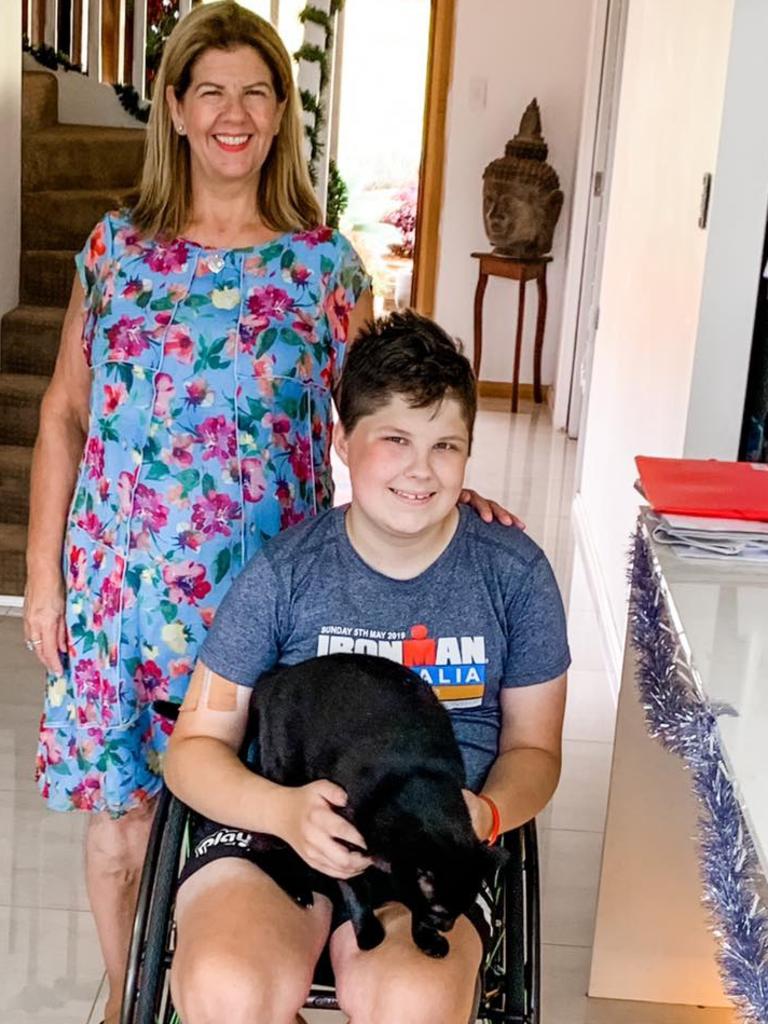 Jake Spurdle with mother Nyky at their Lighthouse Beach home768×1024

Jake Spurdle with mother Nyky at their Lighthouse Beach home

“It will certainly be a red and green affair, and I’ve encouraged anyone who doesn’t want to wear red and green to wear colour,” she said.

“A celebration of his life, his legacy and what he’s done in the last year and a bit, and his friends – we’re doing a few things during the service with his friends and we’ll have a number of special people doing readings.

“I just very much want his friends to be a part of that and be part of their memory.”

A wake will follow at Jake’s former school, MacKillop Catholic College, which has been ‘amazingly supportive’ of Jake’s journey.

On Friday the school issued a ‘Vale Jake Spurdle’ message to parents, advising that they ‘keep Jake and his family in your prayers and thoughts at this very sad time’.

“We also pray for Jake’s many friends, family friends, staff and peers who have been such a wonderful support during his journey,” principal Cath Eichmann wrote.

“Students have been encouraged to discuss Jake’s death with parents and carers.” Jake Spurdle before the Play4Jake weekend in January. Pic Supplied768×1024

Jake Spurdle before the Play4Jake weekend in January. Pic Supplied

Nyky said she will be writing a ‘thank you’ note on the order of service for Wednesday’s funeral to anyone who has played a part in Jake’s life.

“I’m just in the middle of writing a thank you which will probably be on the back page of the order of service just to thank the community … businesses, families, friends, people I know, people I don’t know, that have just reached out and have just been incredible in the last year or so,” she said.

“I can’t actually name everyone … I’ll need to condense it because it has just been absolutely incredible, and that’s to Jake’s credit as well … he has just shined right the way through.”

Plans to continue the Play4Jake foundation and its legacy will continue as Nyky and those closest to her iron out the finer details in the days, weeks and months ahead.

“He fought until the end, and that’s what we’ll continue to do for him,” Nyky said.

There is so much good in the game. You don’t realise it until you see this sort of stuff.
Very inspiring.

I hear many problems adults experience each day, but this teared me up. Why did a young, vibrant Jake Spurdle suffer so much, never losing his smile? He’s a hero and role model for us all.
Eternal Rest grant unto him Lord, and let perpetual light shine on him may he rest in peace. Amen
In prayers and thoughts forever Jake

Jake inspired many and his legacy will continue to do so. Rest in peace young legend.

Those hospital pics have really affected me. I feel so sorry for his parents and the strength they had to show in front of him. RIP little guy.