Graham Annesley has conceded the Warriors scored a crucial try from a forward pass against Canberra and said the NRL plans to trial technology to eliminate such errors.

While the NRL head of football stressed that technology to determine forward passes won’t be used in a 2021 Telstra Premiership match, he said it could be tested in a training session sometime this year.

“We are making progress and we have been talking to a company for quite some time. I’m hopeful that we’re not that far off a trial, a test of the technology,” Annesley said at his Monday media briefing.

“And then, if we get to that point and we can be convinced that the technology is accurate, it becomes a business case that we have to minute to the [ARL] Commission to justify the expenditure and the benefit that will flow … if the Commission was to approve it.”

That’s likely to come as cold comfort for the Raiders, who lost 34-31 at home on Saturday after the on-field officials missed Kodi Nikorima’s forward pass to hand Ben Murdoch-Masila a 60th-minute try. 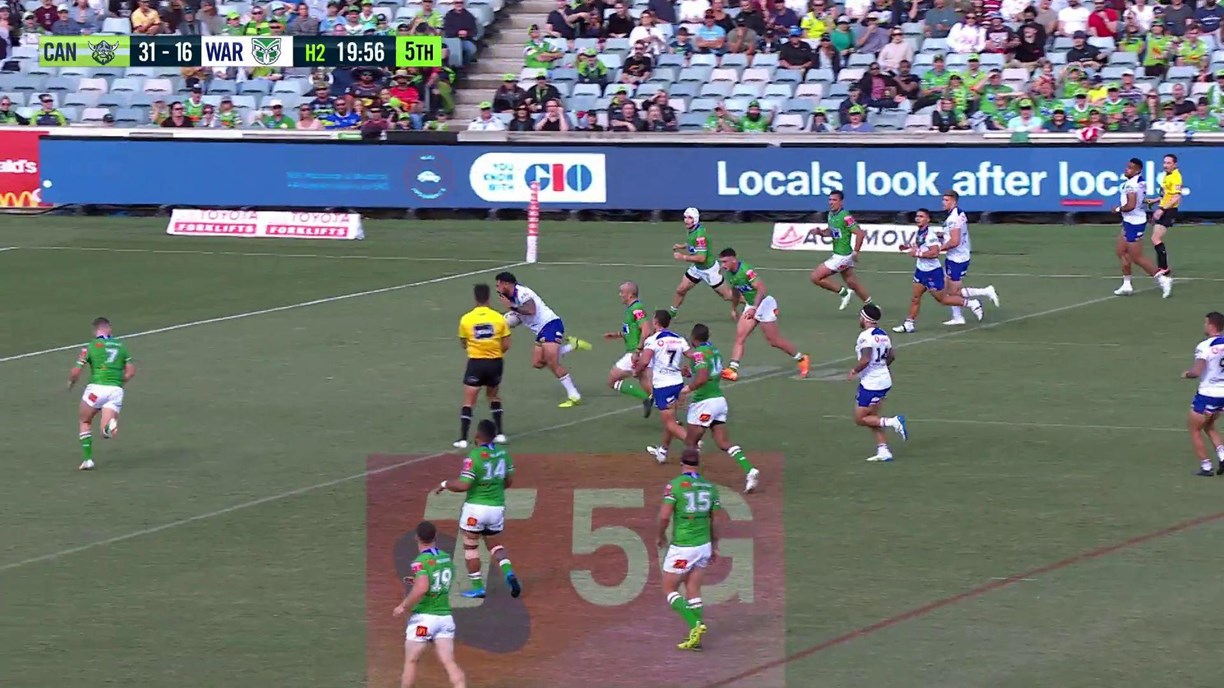 The Warriors, who trialled 25-6 at one stage, got back to 31-22 after the four-pointer and rode the momentum to victory.

Referee Henry Perenara controversially stopped as though he was about to rule a forward pass. Annesley hadn’t spoken to Perenara but said he may have tried to stay clear as play came towards him.

Regardless, he admitted the call was wrong.

“We put up our hand on this one,” Annesley said.

"Camera angles can be deceiving at times [and] there are some factors that probably exaggerated the look of it when it took place, but I’m not going to try and pretend that it wasn’t forward.

"This decision has been reviewed by the refereeing department and by Jared Maxwell, and they believe that it’s a forward pass.

“We can all have debates about forward passes, but until we can get technology that absolutely gives us the answer beyond any doubt, there will always be a question mark over them.”

If all goes to plan, that day may not be too distant with Annesley hoping a technology trial happens in a matter of months.

“It could potentially be in a training session where we put the technology in place and we are able to … convince ourselves that the validity of the technology - and I’m not for a moment questioning that - would work in our game,” Annesley continued.

“[We’d see how it] would work in our circumstances, how quickly it can respond and that we can get it in place with the infrastructure that’s required and mount a business case because everything that we introduce in the game comes at a cost if it’s technology-based and we have to take that to the Commission.”

Stuart has vehemently denied saying anything untoward to the officials as he watched the match from the sideline.

According to Annesley, the tackle had none of the key attributes of a hip-drop offence and Leniu contributed to how it ended up.

Also from Thursday night’s grand final rematch, Annesley backed the Bunker decision not to penalise Penrith for being offside from Melbourne’s short kick-off at the death.

Panthers centre Stephen Crichton touched the ball, but Annesley argued that Storm centre Reimis Smith touched it last as they competed in the air - so Penrith hooker Mitch Kenny couldn’t have been offside.

Annesley said touch judge Belinda Sharpe erred in Sunday’s game between the Knights and Wests Tigers by allowing play to continue after the ball hit the sideline from Daine Laurie’s tap-back to prevent a 40/20.

Laurie went over the sideline and didn’t place a foot inside the field of play before gathering the ball, so Newcastle should have got possession.

And the Cowboys correctly had a try chalked off for obstruction in their loss to the Titans because Esan Marsters was in front of Murray Taulagi, meaning he wasn’t in a supporting position as the winger ran to the line.