The Storm is confident of keeping Craig Bellamy away from the Broncos and Sharks but constant media attacks could see him walk away from coaching this year.

News Corp can reveal Bellamy is contemplating backflipping on plans to coach on at Melbourne next season in the wake of a media firestorm surrounding the Storm’s history of wrestling tactics during his 18 years in charge.

The Storm are closing in on the signature of Bellamy with the super coach poised to pledge his future to the Storm in a final hammer blow to Brisbane’s hopes of luring him to the Broncos.

Breaking his silence on the contract saga, Storm CEO Justin Rodski is confident they will stave off a Brisbane poaching threat as Bellamy prepares to face his good mate Kevin Walters in Friday night’s Broncos clash at AAMI Park.

But Bellamy’s employment title at the Storm next season could change with the Melbourne mentor weighing up whether to walk away from head coaching when his contract expires at season’s end. Bellamy is said to be so gutted by claims his methods caused injury to rival players that he is considering aborting plans to coach on in 2022 and take up another role at the Storm.

Storm chairman Matt Tripp has offered Bellamy more time to make a definitive call on his future as the 62-year-old ponders whether head-coaching will expose his family to the type of fallout he has experienced in the past week.

Bellamy sought the counsel of Storm insiders over the weekend as he mulls over retirement.

Bellamy has consistently weathered criticism over Melbourne’s defensive tactics since the emergence of the grapple tackle 15 years ago.

Brisbane chiefs held talks with Bellamy last August with a view to the veteran Storm coach coming on board from 2022 to preside over a cultural rebuild with new Broncos coach Walters, his former assistant at Melbourne.

But Brisbane’s hopes of a Walters-Bellamy alliance at Red Hill are fast fading. The Courier-Mail understands retention talks have reached an advanced stage with Melbourne proposing a lifetime deal that would see Bellamy remain at the Storm until his 70th birthday.

Rodski stressed the Storm are in no rush and are affording Bellamy all the time he needs to make a definitive call, but Melbourne powerbrokers would be stunned if he quit to join the Broncos or his other suitor, the Sharks.

“We are certainly optimistic Craig will stay,” Rodski said. Broncos coach Kevin Walters (right) was a one-time assistant to Craig Bellamy at the Storm.1280×720

Broncos coach Kevin Walters (right) was a one-time assistant to Craig Bellamy at the Storm.

“He has been an incredible coach not just in the NRL but Australian sport for a long period of time.

“We’re expecting a decision from Craig pretty soon. There’s no rush from our end.

“Craig has had some things going on from a personal point of view that we have been very respectful of, but he has earnt the right to take his time to make that decision and when he does we look forward to making an announcement.

“His reputation, experience and success speaks for itself and we think he is at the top of his game.

“We are certainly really hopeful he remains at the Melbourne Storm for some time to come.”

The Broncos are prepared to offer Bellamy a five or 10-year contract, but the Storm are equally open to a multifaceted arrangement. Under Melbourne’s plan, Bellamy would extend his tenure as head coach for another 12 months, before moving into a consultancy or coaching director’s role for the next five years, by which time he would be 69.

Last week, Bellamy was leaning towards coaching in 2022, but the events of the past week could trigger a change of heart.

Former Broncos assistant Bellamy launched his NRL coaching career with Melbourne in 2003 and Rodski said the club would understand if he desired a new role.

“It’s certainly an option for Craig to transition into another role with us,” Rodski said.

“We are also mindful that there will come a time where Craig wants to step back from the coaching role on a full-time basis. “We would like to think in our discussions with Craig there is flexibility in the deal for him to do that at a time when he is ready to do that.

“We think Craig has a lot left to give the game and our club, he is making a significant contribution and we want him for a long time into the future.

“What he has been able to do for the Storm over such a long period of time, we understand a number of clubs would want to talk to him, but we‘re hopeful he will coach our club for a number of years to come and that’s what we are working on with Craig.

“Whether he moves to Queensland, I don‘t know. He has lived (in Melbourne) for a long period of time and has grandkids in Melbourne, as well as family in Queensland, but he seems very content in Melbourne.”

Your retiring cause smith is gone, you know it.

The slide has started already

Off is where I would like bellyache to fuck.

add Bellamy to the “I’m offended by the truth” list

The team and a lot of it’s players, are a shit stain on the NRL. Good riddance to all of the fuckers

He ain’t leaving for any other reason other than the fact he knows he won’t be doing much with the squad he has.

Kent was absolutely bang on with his remarks of Bellamy and the Storms tactics. As quick as the NRL outlaws one of his tackles that cripple players the slimy prick invents another one. The list of such tackles that Kent read out on NRL360 was quite alarming and shows what a blight him and his club are on our game inventing tackles that maim players and damage the whole spectacle of the game by turning it into a boring wrestling match.

What a fuckin cry baby. He is a grub who coaches grubs.

and yet they always bent over backwards for these fuckers. To win viewers in Melb? Bizarre

We would have won another comp in the last 10 years only for this grub who fucked the game .

I always thought Bellamy was bit of a biscuit watching him carry on in the coaches box during games.
He is also a fukn sook. Fancy wanting to quit over something that moron kent says. But in saying that Kent nailed it.

With the microscope on the @storm tackling techniques again this week, tried to lighten the mood a little in tomorrow's @telegraph_sport . My art for kenty's column on the history of the game's best movers and shakers. @dailytelegraph #nrl #storm https://t.co/mDJbgzUcF9 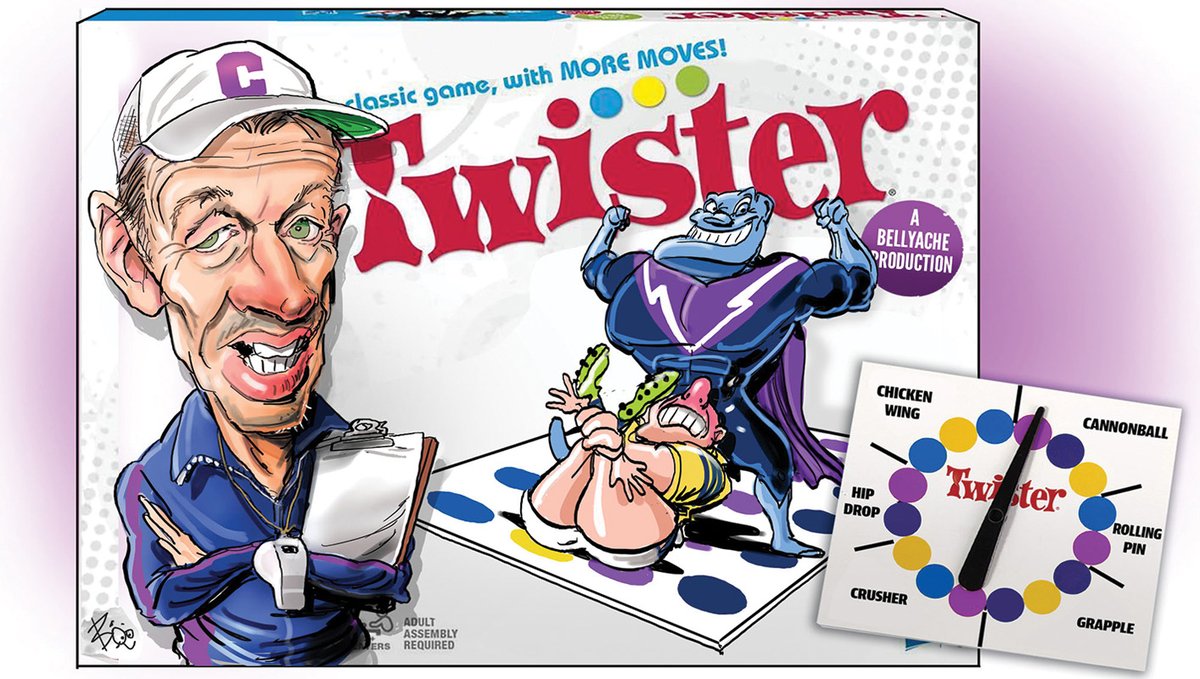 Gee, if that is truly how Bellyache feels then I hope the media go five times as hard at him.

However I think Bugsbuddy71 is on the money regarding the real reason he is likely to hang his hat up.

Yep itll be about his protecting of his record, not about a harsh story from a journo.
I cant stand the guy, the biggest failings have been made by the game and its administrators not to deal with their obvious tactics.
What would be the chances that the club responsible for inventing new illegal tackles every year, would be responsible for the terrible alex mckinnon “accident”.

You would think that any type of half reasonable human would say from the McKinnon incident on that our club would much prefer to lose games than hurt and maim another human.

The attitude should have been…

‘We as a club the wonderful Melbourne Storm will not be a part of any tactics outside the rules deliberately, nor will we have a wrestling trainer at 3 sessions a week going forward’ ‘ this is how serious we take what we have been a part of at this disgusting club ‘

Maybe the penny has dropped and he’s worked out that without the benefit of grubby ruck slowing and wrestling tactics his time at the top will be over. His kit bag will be empty.
The game will be all the better without him in it.