Casualty Ward: Murray out of series

NSW forward Cameron Murray is out of the rest of the Ampol State of Origin series after suffering a hamstring injury in the first half of the series opener in Adelaide.

The Rabbitohs star was ruled out of the match by half-time and coach Brad Fittler on Thursday said although the injury was not serious, he would not be available for the remaining two games.

Panthers forward Isaah Yeo, Storm veteran Dale Finucane and Eels lock Nathan Brown are the likely candidates to replace Murray in the squad for game two in Sydney next Wednesday.

Earlier, Maroons centre Brenko Lee was ruled out of the match after limping off the Adelaide Oval during a late fitness test on Wednesday night.

Queensland finalised their 17 for the match with Kurt Capewell making his debut against NSW after initially being named in the reserves.

Capewell failed to finish the match after aggravating his groin injury while Maroons prop Christian Welch also had to be replaced in the closing stages after suffering a head knock.

Despite a shorter-than-usual seven-day turnaround between Origin fixtures, Capewell told NRL.com that he was confident he would be available for game two at ANZ Stadium.

The NRL match review committee announced on Thursday that there were no judiciary charges coming out of the match.

The NSW women’s squad have their own injury concerns ahead of the side’s clash against Queensland on November 13 with Kezie Apps and Isabelle Kelly racing the clock with respective leg injuries.

The pair have made the trip to the Sunshine Coast in preparation for the match despite Apps (medial ligament) and Kelly (syndesmosis) failing to finish the NRLW season with concerns.

“The knee is feeling good, I’m on track to play and am in good hands,” Apps said.

NSW utility Botille Vette-Welsh (hamstring) made a successful return for the Roosters in the NRLW grand final in a boost for the Blues. 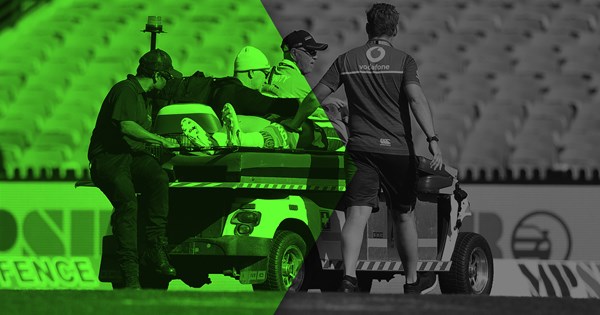 All the latest info on who's in, who's out, injuries and unavailability for all rosters for 2020.

Confirmation from the Blues that Cam Murray has been ruled out for the series after suffering a hamstring injury in Game 1. Whilst not a serious hamstring injury, very tough to return to play within 14 days (time til Game 3) without high risk of re-injury.

From the NRL physio

Best outcome for us

Hopefully, that means he will be good to go Round 1.

If I was Cameron I would be breathing a sigh of relief knowing I could finally put my feet up for the season.

Round 1? He should be right for offseason training let alone round 1.

Cameron Murray will not take part in the rest of the Origin Series after suffering a hamstring injury last night. 🐇❤️💚 For full details: bit.ly/362odxS #GoRabbitohs #OldestProudestLoudest https://t.co/LfVtuxcqOe

Rabbitohs forward Cameron Murray suffered a hamstring injury playing for New South Wales in last night’s State of Origin game in Adelaide which saw him leave the field of play shortly after taking the field from the interchange bench following an awkward tackle.

Word from the New South Wales medical staff is that the hamstring injury is not as bad as first thought, however Murray will not take part in the remaining two games of the Origin Series over the next 13 days.

Murray will meet with Rabbitohs medical staff in the coming days to determine a path forward for rehabilitating his hamstring in the lead up to the 2021 NRL season. Rabbitohs forward Cameron Murray suffered a hamstring injury playing for New South Wales in last night’s State of Origin game in Adelaide which saw him leave the field of play shortly after taking the field from the interchange bench following an...

Fingers crossed. I’ll wait till we hear the assessment from our guys before getting too excited.

Could’ve been much worse, best we could’ve hoped for I guess.

When he came off it looked like he couldn’t put weight on his knee and it kept wanting to blow out.

We’re lucky SOO was now and not in the middle of the season. Gives Cameron time to recover for 2021 season. We would of missed him big time.

Keep SOO in the offseason

He’ll make heaps of money playing for years in SOO, test matches being captain of his club, state & country.

dropped this year to $10k per game

To be picked or win bonus ?

That’s why I’m in favour of the current set up, and playing SOO at season’s end. It won’t affect Souths with regard to his availability, whereas if it was held during the season, the club would be unfairly penalised and not have his services, for what is essentially a glorified series of exhibition matches. It can make the difference between the club making or missing the finals.

That’s why I’m in favour of the current set up, and playing SOO at season’s end.

I agree but unfortunately the broadcasting networks hold the key so we are at their whim.