When South Sydney chief commercial officer Shannon Donato is asked to identify the club’s catchment area, he has a ready-made reply.

“It’s something I often get asked and I always say our catchment is between Maroubra Beach and Cottesloe Beach," Donato said.

Souths have almost as many members in Western Australia as they do in Sydney’s eastern suburbs and inner city, and nearly twice as many in south-east Queensland.

However, the largest area for Rabbitohs supporters is Sydney’s west, where about 10,000 of the club’s 29,670 members reside.

South Sydney pip Parramatta for the largest membership base in the NRL, with the Eels having 29,011 members.

Ticketing data for Saturday’s sold-out elimination final between Souths and Parramatta at Bankwest Stadium indicates that the overwhelming majority of fans at the match are from Sydney’s west, including those in the Rabbitohs supporter bays. With the victor to play minor premiers Penrith in the grand final qualifier, the three clubs have formed a virtual western Sydney conference and they are competing for hearts and minds - as well as premiership glory.

The Panthers are the third most supported Sydney team, with 18,906 members, ahead of Wests Tigers and Canterbury in a tightly contested western Sydney market – although Penrith officials view the other clubs as “east” and are looking to grow support beyond the Blue Mountains.

The Rabbitohs, whose fans were evenly split in a recent survey asking whether they would prefer the club to remain at ANZ Stadium, play at Bankwest Stadium or return to Moore Park once the new Sydney Football Stadium is completed in 2023, have a long term western Sydney strategy.

Our catchment is between Maroubra Beach and Cottesloe Beach

With the population of Camden set to triple to 143,000 by 2036 and 42 per cent growth predicted for Campbelltown, Souths are targeting a new generation of fans in Sydney’s west and south-west.

Souths Cares, the club’s community arm, has established the Liverpool Opportunity Hub to provide support for Aboriginal students from grade five until they finish school and transition into education or employment, while other staff deliver school programs in western and south-western Sydney.

They include former Rabbitohs players Rhys Wesser and Yileen “Buddy” Gordon, while Greg Inglis is also involved in a part-time capacity.

“We have got a long and storied history of support in the western Sydney community,” said Donato, who played 78 first grade matches for Souths, Cronulla and Penrith.

"For us, it is about real community engagement. Every school holidays we do clinics, every day of the week we are in schools and we are working with people to transform their lives, whether it be through education, employment or the health programs.

“We have got staff committed to strategies in western and south-western Sydney. It is something we are very passionate about and it is a secret to us having the biggest membership in the NRL.” The Eels have seen a 16.5 per cent spike in memberships during COVID – the largest increase among NRL clubs.

“We believe 40,000 members is a realistic goal within the next two-to-three years,” Parramatta’s head of communication and brand Joshua Drayton said.

The experience at Eels games since Bankwest Stadium opened last year has resulted in waiting lists for some categories of ticketed membership and the club has now surpassed the Broncos for the most season ticket holders.

Western Sydney has a diverse and growing population, and that is a strength and opportunity going forward.

The Eels have enjoyed the support of a strong multicultural base via the various communities who have settled in Western Sydney over the past decades.

They are also starting to engage with the new multicultural communities who have settled in Western Sydney and North-West Sydney. Victoria Bitter presents – ‘Keeping The Light On’ in Tathra

Eels fans are drawn mainly from the Parramatta and Hills District areas, which also have booming participation numbers.

The Hills District has the highest number of redeemed Active Kids vouchers in NSW for all sports, including league and touch football.

Rouse Hill Rhinos is the fastest growing rugby league club in Australia, Toongabbie Tigers has enjoyed the biggest growth in female participation, while Hills Bulls and Kellyville Bushrangers are other strong clubs in the area.

Parramatta share their training base at Kellyville with the Bushrangers and the club has secured $15 million in Federal Government funding to develop a community-based match venue, with a grandstand and capacity for 5000 spectators, on the site.

The Eels plan to play Canterbury NSW Cup and women’s games at the venue, which will also be a home for all their junior representative teams.

“We will have a Centre of Excellence and next door we will have the biggest rugby league facility of its type in the country and all of it will be community based,” Drayton said.

“This will bring our Members, fans and community closer to the Club then ever before.” 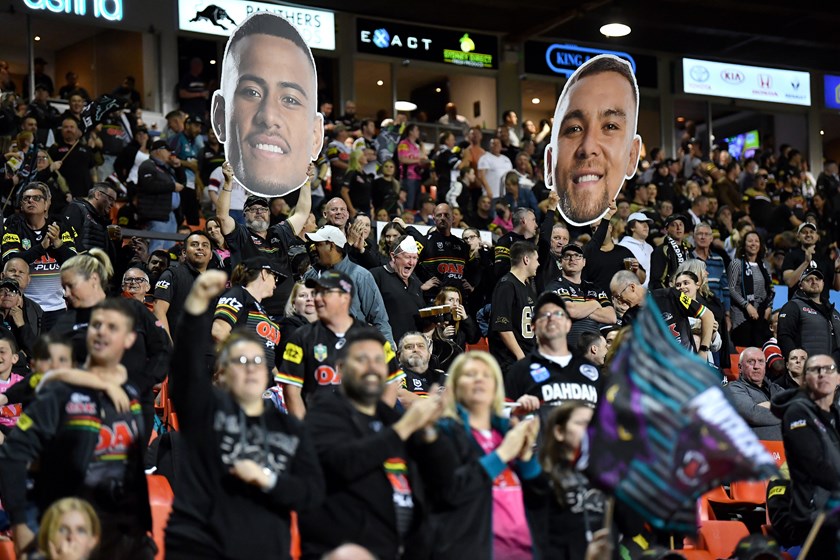 It’s been a big year for Panthers fans.©Gregg Porteous/NRL Photos

All 700 players at an Under 6s gala day at Panthers Stadium last month received a replica Penrith jersey and watched an address on the big screen from Nathan Cleary.

The Panthers are unlikely to see the benefits of the exercise, organised by Penrith and Districts Junior Rugby League general manager Nathan Mairleitner, for another decade but it is a step towards ensuring long-term support by those players and their parents.

“There is a much closer connection now between the Panthers and the Penrith junior league,” Panthers GM Matt Cameron said.

"They have always had an Under 6s gala day but this has just taken it to the next level.

“Every Under 6s kid in the district was given a Panthers jersey. They played a game on the back field and then they came in and got their jersey before playing a game on the main field at Panthers Stadium. It was phenomenal engagement, and it is about keeping them now.”

The success of the Panthers this season has seen an increase in support but it is the number of local juniors and the connection with the Penrith community that the club hopes will see that continue to build.

“If you go up into the corporate spaces on a game day everybody knows everyone,” Cameron said. "There is a real connection within the area and then a deep-seated connection back to the football team.

“[Panthers chairman] Dave O’Neill says everyone in Penrith walks a bit taller on Monday after a win because they feel like they are part of it, and they are.”

The Panthers have also been working to grow support in the western corridor region of NSW, with the club taking one home match to Bathurst each season since 2015 and having committed to doing so until at least 2028.

With seven of Penrith’s last 22 debutants coming through the Western Rams program, the move is paying dividends on and off the field.

“The country regional program that the Western Rams run is a natural fit for what we do,” Cameron said.

“It kicked off in Group 10 because of the game in Bathurst and that morphed into doing a bit in Group 11 around Dubbo and the Rams encompass Group 14 as well which pretty much goes out to the border.”

With Souths announcing that they will play a match at Dubbo next year, the Panthers would also be interested in being the away team.

“We play our 11 home games and we take one game to Bathurst so I’m sure it would be worth a discussion if Souths were interested,” Cameron said.

“Any club that is promoting footy in country areas deserves a pat on the back.” Movement the key to the South Sydney attack1224×688

Movement the key to the South Sydney attack

The Rabbitohs announced on Thursday that they will be playing nine home games at ANZ Stadium in 2021 and taking three other matches to Dubbo, the Central Coast and Sunshine Coast.

All are areas where South Sydney have strong support, according to the club’s data, which shows Rabbitohs members live in:

“Fandom tends to be generational. If mum and dad go for a team they bring up their kids to go for that team and so on,” Donato said.

“By virtue of the fact that we are a foundation club with 112-years history, the population have moved away for reasons of lifestyle and affordability so that fandom over the generations has gone with them.”

After experiencing an increase in memberships when Souths won the 2014 grand final followed by a sharp decline, the Rabbitohs developed a strategy for future growth focused heavily on population projections and public transport projects.

Suburbs such as Green Square and Mascot in Souths’ traditional heartland are forecast to have increased populations and have major rail stations, while the construction of Sydney’s light rail network could help attract fans in the eastern suburbs.

However, longer-term opportunities were identified in Campbelltown and Camden, which is predicted to have the highest population growth in NSW of people under 20. Rabbitohs, Eels and Panthers trying to win hearts and minds in Sydney's west - as well as a premiership