In the same week boxer Anthony Mundine announced he was quitting boxing, his teenage son was almost forced into early retirement alongside him.

C.J Mundine, a fullback for the South Sydney Rabbitohs, suffered a dislocated hip against the North Sydney Bears in their NSW Cup clash last weekend – a shocking injury that has previously forced players out of the game.

And the tackle that forced 19-year-old Mundine to be rushed to hospital in an ambulance was made by Roosters superstar rookie Joseph Suaalii.

Suaalii sent Mundine a text message on Monday: “How you going brother? Sorry for the tackle brother hope the recovery goes well.” Doctors at Royal Prince Alfred Hospital were able to put his hip back in without surgery.

He now hopes to be back for the last six weeks of the season.

“It will be three or four months,” C.J said.

Anthony Mundine was at Stadium Australia for the game and rushed to the sheds to comfort his son, who looked visibly distressed when he was taken from the field.

“The kid is like me, he’s chasing his dream and will never give up.

“It’s his passion. He wants to come back stronger and reach his goals. He wants to be an NRL player and this won’t stop him.”

This is the same injury that forced Chris Lawrence to miss most of the 2011 season, and for which the former Wests Tigers star needed “five or six people to get it back in”. Thankfully, that wasn’t the case with C.J. 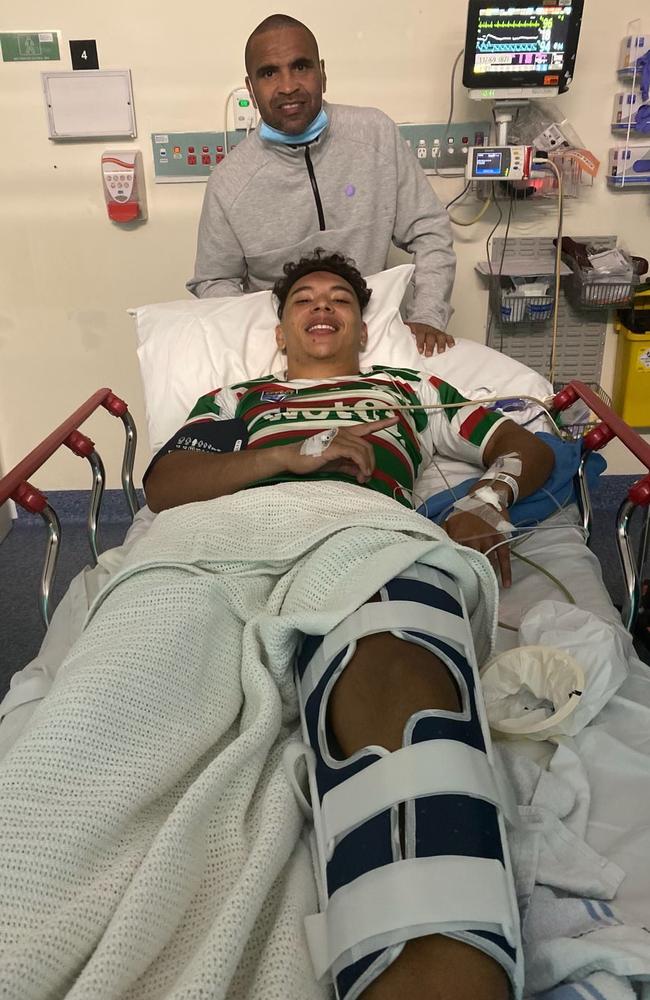 Anthony Mundine and his son, C,J, in hospital.

“It was a freak accident. There’s probably one chance in 10,000 you can dislocate your hip playing rugby league.

“He’s a tough kid and I thought he’d get up. Then when they put him on the medicab I knew it would be serious so I went down to the sheds and then off to hospital.”

C.J is still eligible for Jersey Flegg (under 21s) but excelled in the pre-season and was elevated into reserve grade to start 2021.

Mundine says his son is determined to make it back.

“He’s in good spirits and he’ll do his rehab properly and get strong again,” he said.

“He was spewing because this is the last year of his contract and he wanted to have a big season. “The club loves him and they’ve seen how hard he works and how much he’s improved.”

C.J was discharged from hospital on Monday afternoon.

He replied to Suaalii’s text message: “All good bra it happens and thanks cuz.”

The Rabbitohs won a six-way race for Mundine’s signature two years ago, after he spent a couple of seasons coming through the Harold Matthews and SG Ball ranks at his father’s old club, St George Illawarra.

While C.J was wearing the No.1 jersey when he was injured, he is a talented player who can feature in the outside backs or the halves.

The Boxing Topic - #816 by Serendipity

The twisted part is that the injury wouldn’t have even got a mention if Suaalii wasn’t involved in the tackle.
Just when you think the media’s level of obsession with this guy has peaked, it goes even higher.

It would of got mentioned, you’re forgetting who the kid’s father is.

I don’t think they are trying to say that at all.

I’d be cautious if I was Suaalii minders because I can smell the media setting him up for a fall. The media will build his profile up to Superman status which is unfair for an 18 year old untested amongst men. And when he is man handled by NRL players and doesn’t perform to lofty expectations, the knives will be out. I’ve seen this time and time again with young junior superstars like Hastings, Latrell, Carlos Filga(SBW clone), John Folau, Flanagan, Deardon, and the list goes on.

Hastings wasn’t built up to be a superstar.

The bloke was an A grade fuckwit who other players hated so he had to scurry off to England.

Hastings was a junior superstar rep with a big reputation and chased by many clubs. 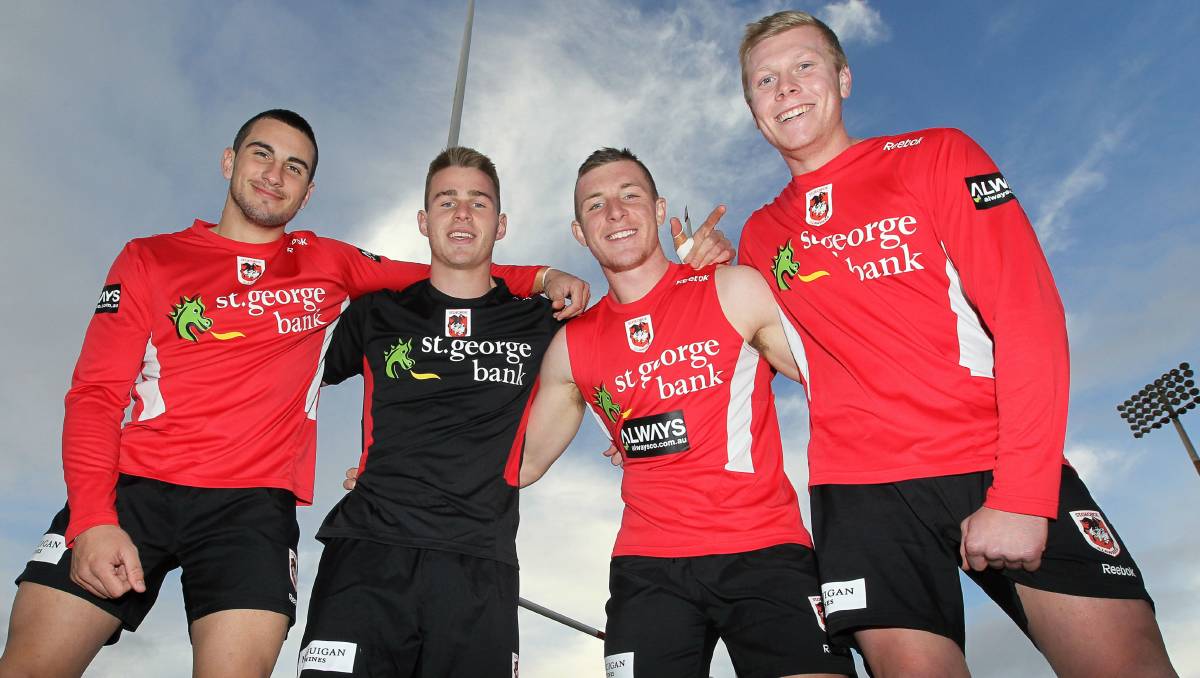 The jewel in St George Illawarra’s junior system, Jackson Hastings, will follow in his famous father’s footsteps after inking a three-year deal to join the Sydney Roosters.

The Sydney Roosters have announced the signing of highly sought-after Australian schoolboy, Jackson Hastings on a three-year deal..

You’ve pulled an article from the Illawarra Mercury and a footy forum reposting a clubs media release! LOL

Never said Superman but he was highly regarded as a junior superstar and ultimately chased by many NRL clubs including the Rorters. My point being, he was a disappointment after being billed as a future NRL star.

The young kid off contract. Hopefully the club offers him a new deal. He seemed to work hard in the pre season training with the big boys and comes across as having talent and good attitude

First every reporter raves about a 17-year-old schoolboy (Suaalii) and then the Editor of the Daily Telegraph thinks it’s okay to name and shame him on the front cover of the newspaper for a tackle in a game.

And the tackle that forced 19-year-old Mundine to be rushed to hospital in an ambulance was made by Roosters superstar rookie Joseph Suaalii.

I wish CJ a speedy recovery. I hope he stays at Souths. Rabbitohs sign CJ Mundine for Seasons 2020 and 2021 The South Sydney Rabbitohs are excited to announce the signing of young back CJ Mundine to a two-year deal which will see him wear the cardinal and myrtle jersey until at least the end of the 2021...

I feel sorry for Suaalii, he will be a target when he okays NRL.
I remember Blocker putting Kimmorley and he said welcome to first grade.
I can see Koala or Jnr or Tom doing the same thing.