Adam Reynolds’ manager has publicly confirmed for the first time what every Souths fan was fearing – the Rabbitohs star is preparing to quit Redfern.

Adam Reynolds’ manager has publicly admitted for the first time what every Souths fan was fearing – the gun Rabbitohs star is preparing to quit Redfern.

Several clubs are privately discussing Reynolds although no official approaches have yet been lodged.

Leading player agent Steve Gillis told The Daily Telegraph his client would have no choice but to walk away unless the unlikely scenario plays out that Souths relent and offer Reynolds a new deal spanning two or three years.

Souths management is refusing to buckle and their offer for Reynolds spans just 12 months.

Gillis has attempted to avoid commenting on the Reynolds stand-off but finally relented on Wednesday, declaring: “Unless things change and Souths reassess their position, I don’t envisage Adam will be there in 2022. Unless Souths are prepared to move, I can’t see him there.

“Adam would love to stay but Souths run the risk of losing him – that is reality which is drawing closer every day if Souths stall on a second year. Souths have stuck firm on their position since the get-go and that’s fine.

“I would assume Souths have weighed this up carefully before making their decision to offer a one-year contract.”

Reynolds, who remains in doubt for Friday night’s match against Sydney Roosters with concussion, could attract a three-year deal worth around $2.1 million.

Coach Jason Demetriou is a huge Reynolds fan, but the Rabbitohs are arguing they are being financially prudent with their contract negotiations.

“Understandably, Adam is determined to secure a longer term deal. He has a wife and four young children and wants the security of knowing where he will be from a longer term point of view,” Gillis said.

“I will continue to explore all options for him and I am sure there will be plenty of interest in him after clubs have had a chance to assess their rosters and look to the future.

“The market will surge in about four-to-six weeks’ time and I anticipate there will be plenty of interest in his services.

“He’s premiership winner, an Origin representative, a captain and a leading point scorer and you can add to that he has the best kicking game in the NRL.”

Souths want to retain Reynolds but the club does not want to be pressured into beefing up the contract offer.

If Reynolds were to shift to the Tigers they could move Luke Brooks to five-eighth.

Tom Dearden is off contract Brisbane, Ash Taylor’s deal at Gold Coast ends after this season, North Queensland will have a halves vacancy with Jake Clifford leaving the Cowboys while Cronulla’s Chad Townsend has yet to take up an option in his favour for 2022.

Given it’s only round three, most clubs will wait at least a month before initiating any formal approach for Reynolds.

Reynolds was concussed against Manly last weekend with a final decision on his availability for the Roosters game likely to come on Friday morning.

Yep it’s all speculation, there’s a stack of rubbish clubs with no good halves and Reynolds could earn more dosh at South’s on one year deals for the next three years then a cheap tigers deal now.
Nothing to worry about.

I support Souths’ stance on this, Reynolds is a solid little player and has the best conversions in the game however, we have an evolving roster that can support the likes of Blake Taafe &/or Lachlan Ilias in their debut seasons.

We have a pretty good back-up kicker in Latrell.

I’d be 100% on not re-signing Reynolds or Cook and unfortunately with Cook signed up for another two seasons, it will have to be Reynolds.

We did fine after Sandow left and brought in Reynolds so i can’t see any reason why we couldn’t transition as well if not better with Blake or Lachlan. 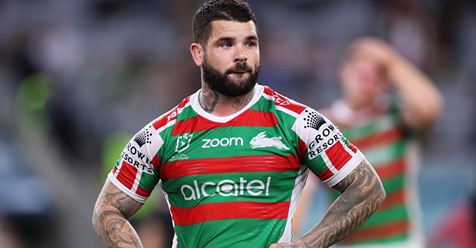 One year deal with a one year option in our favour, with I’m sure an option to go on staff at the end of his playing days in some capacity.

If he can get a 3 year 2.1 mill deal somewhere else that’s awesome for him and his family.

I love the guy but Souths need to be like the Roosters, Storm and Broncos of old. Better they go a year early than a year late.

Taffe is the future ang maybe we get to keep a Sua, who knows.

Love Reyno but until the cap situation changes in relation to one club players, I think the club is doing the right thing as terrible as it would be losing him.

Good onya Adam the offer from Souths to a local junior is a insult. South’s loss

A one year deal with an option in the clubs favour is a one yr deal, especially when the club has been steadfast in not moving from their initial offer.
Try winning a comp with all this hanging in the ether. Good luck!

Yea, I agree. This looked like our best chance to win a comp this year but all of this will play out for the entire season.
I think the club knows what they’re doing and why they’re doing it and, at the end of the day, it’s just business.
Can anyone really imagine Reyno playing for the Tigers and actually improving them very much??
I can’t really.
Reyno needs a strong roster around him not a weaker one. He’d be crazy to join a club like Canterbury or the Tigers.
It would be just for money and, that never ends well for older players.

Won’t make the 8 if this continues Souths need to get this sorted now. Stop being arseholes and give him the 2 years.

one year deal with a second year in our favour to be exercised if he wins the premiership taking injuries into account etc, he’s south sydney through and through i’d be offering that to him unless it meant losing Blake then id be sticking to my guns about a 1 year extension

Blake can play the Benji role next year at least.

Not an insult by Souths mate.

It’s an insult by the NRL. They need a better system for long term players.

He will stay for less as long as we do 2 years. Souths need to budge

I can’t understand why the club is so hard line. You just can’t have a one size fits all rule. Turn 30 and you only get get a year contract.
Not good PR and it would certainly have other players considering their options. Even old bellyache said loyalty is a 2 way street.
I too hope this doesn’t derail our season. We get through all the publicity thanks to Wayne stature then we shoot ourselves in the foot.
I don’t get it.

Especially since we signed Mansour for 2 years and his over 30.

Maybe there IS more to it than what’s been reported?
I don’t think turning 30 means that from there on, every contract will only be signed on a year by year basis.
That will play a role but I think there are other reasons too that are not being made public.